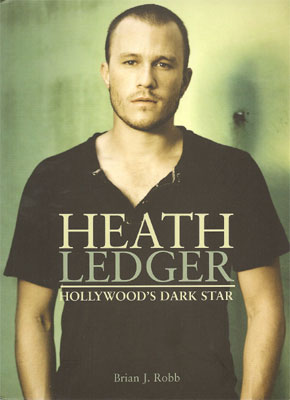 Heath Ledger was one of the most charismatic and powerful screen presences of his generation.

A mercurially gifted young actor, Ledger's sudden death at the age of 28 rocked the film industry to its core, created an international media storm and threw a poignant shadow over the completed body of work that has now become his legacy.

Heath Ledger: Hollywood's Dark Star is the definitive story of the life and times of this compelling and intense young man.

Having established a high-profile acting career by the age of 21 with the lead role in A Knight's Tale, the young Australian went on to pursue a succession of increasingly diverse and often subversive roles that challenged the film industry's initial impression of him as a mere teen idol.

While a limited number of his early roles would hint at the greatness of which he was capable, it was not until his melancholy, Oscar nominated performance in Ang Lee's modern classic Brokeback Mountain that Heath proved beyond question the blistering extent of his abilities and secured his place amongst the Hollywood elite, bringing to this new status a depth of artistry absent in all but the most accomplished of his contemporaries.

Illustrated with over 100 colour portraits throughout, Heath Ledger: Hollywood's Dark Star explores Heath's relationships with actresses Heather Graham, Naomi Watts and Michelle Williams (his ex-fiancée and the mother of his daughter Matilda), recounts the full story of the making of Brokeback Mountain, and details the film's subsequent impact on the actor's life.

It charts Ledger's increasingly troubled state of mind as the role of the Joker in The Dark Knight took a disturbing physical and psychological toll, and examines the dissatisfaction with his own performances that plagued him until the very end.

About the Author:
The New York Times best selling author Brian J. Robb is the author of Johnny Depp: A Modern Rebel and The Leonardo DiCaprio Album.