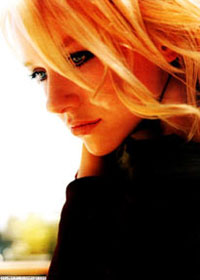 Before she became an international celebrity, before she was clutched by a giant ape or scared of a Ring or two, British-born Aussie Naomi Watts was unknown, struggling and determined to find herself in a town willing to chew up those who can't stomach rejection. Back then, Watts starred in a cute, funny and true-to-life short film, Ellie Parker, a hit at Sundance at a time when most of the world was still waiting to discover Naomi Watts. That was then, this is now, and this time she returns to Sundance older and wiser, in the midst of shooting Peter Jackson's King Kong with her sequel to The Ring about to open. At Sundance for a little over a day, she spoke exclusively to Paul Fischer who, of course, has known Naomi through both extremes of her career, as they both recalled.

Dressed to the hilt in appropriate winter gear, Naomi Watts is full of energy during her brief sojourn at the Sundance Film Festival. As we sit upstairs in a Park City restaurant, Watts laughingly recalls her first visit to this wintry, but crazy film festival, when she was the one frantically calling journalists such as myself, begging us to cover this little short she both starred in and produced, Ellie Parker. "We were literally accosting people on the street, begging them, throwing flyers in their face," she recalls laughingly. Four years or so later, and how the mighty have risen.

The irony does not escape the blond actress, whose Ellie Parker cuts close to her own life, in the story of a naïve Australian actress in Hollywood going from audition to audition, ready to finally give up her dream of being an actress. Both the short and subsequent feature, which was shot on and off over the last few years, co-starred her close friend Rebecca Rigg, now married with children, living with actor/husband Simon Baker in Malibu. While Ellie Parker seems almost autobiographical, Watts tries to downplay the apparent parallels between her life as a struggling actor, and that of her fictional alter ego. "I mean it's true that there are moments that happen in the film, that were inspired by pieces of truth from our own lives, but obviously it's completely heightened reality and variations of the truth as well. You know, Scott [Coffey, director] was a struggling actor for many years as well and he'd gone through years of those horrible auditions, losing your dignity and being told who you are and believing it because of your self-esteem levels. so yeah, when Scott and I as actors worked together, a couple of times, we talked about these experiences, and he had had this idea that he'd been thinking about to do this film about an actress going from one audition to another. That was the original idea, and then it kind of just grew and evolved," Watts explains. "I can see the temptation to draw a parallel but it's really not my life, it's the combination of Scott's, Rebecca's and all of our experiences thrown in and shaking it."

Yet, like Ellie Parker in the film, both Ellie and Naomi were at times willing to give it up, but somehow manage to find this professional far too irresistible. "You can't give it up," Watts adds with a low laughter, comparing acting to an addictive drug. She says that what makes acting so addictive, is "because you love what you do. It's the creative thing that when you're actually acting, between action and cut, THAT is fun, or even in the drama class or whatever forum you're doing it in. It's the other stuff that's horrible - the exposing yourself," referring to the often debilitating audition process that she embarked upon for almost a decade prior to her attention-grabbing role in Mulholland Drive. "That's what Ellie Parker is more about, not just about the acting experiences, auditions, managers, agents and stuff, but about a young woman who is putting too much emphasis on other people's opinions of herself, and therefore wrapping up her own identity in these people who couldn't possibly know who she was. So that struggle for integrity and identity is more of what we were trying to say," Watts insists.

The days of those endless auditions may be over for Naomi, but she constantly returns to the small film arena which challenges her. This year alone, Watts will be carrying three major films: The Ring Two, Stay and the gorilla of them all, King Kong. "It's a beautiful juxtaposition, working on probably the most expensive movie of the year as well as the cheapest movie of the year," she says, laughingly, referring to Ellie Parker and Kong. "But the intention remains the same and my commitment to what I'm doing is exactly the same. It's fun to go from these totally polar, opposite worlds."

While Watts did not need to appear in this week's Ring Two, the actress concedes she was contractually obliged to star in the spooky thriller. "Back then, I really didn't have the power of choice," Watts concedes, yet having said that, she had no qualms revisiting the world of The Ring, this time directed by Hideo Nakata, who helmed the original. "The first one was a good script, the film did very, very well and it went beyond a genre piece, with an extreme character in it which is quite rare in a genre, where there is usually just running and screaming," the actress explains. "The Ring 2" picks up six months after the horrifying events that terrorized Rachel Keller (Watts) and her son Aidan (David Dorfman) in Seattle. To escape her haunting memories, Rachel takes Aidan and moves to the small coastal community of Astoria, Oregon, to start fresh. However, Rachel's resolve quickly turns to dread when evidence at a local crime scene - including an unmarked videotape - seems eerily familiar. Rachel realizes that the vengeful Samara is back and more determined than ever to continue her relentless cycle of terror and death. Watts says that her "character had a lot more substance and it was about confronting the situation, thepsychological aspects to it, and moral dilemmas, which I think have come up again in the sequel. They took a long time with the script, DreamWorks are very clever people, they know how to make it right and they persisted. We have a great director, who directed the original one, and we have a great cast. I think there is always that fear of doing any sequel but we took our time in trying to make it the best we could, while also give a nod to the audience."

Still in New Zealand shooting King Kong, Watts has no doubts as to why Kong is a huge film she as more than keen to become a part of. "It's going great. I love it. It's fantastic. Peter Jackson and his team of people are just extraordinary," Watts enthuses. Meanwhile, Watts is not thinking about the pressures of headlining such a highly anticipated and expensive movie. "I try not to pay attention to it. I show up on the day and give it my all. I'm as committed to that film as I am committed to something like Ellie Parker." As long as this journalist has known Watts, from Flirting to Kong, the one constant is that she is as hard on herself now, as she was throughout herburgeoning career. "I'm my worst critic. I have a little bit more confidence that it won't all go away tomorrow and I don't have to do everything that comes along." Indeed, Watts is finally ready not to give up quite yet.