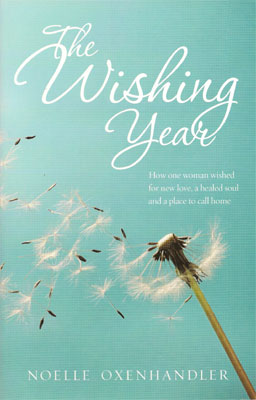 A true-life The Secret with a strong dash of Eat Pray Love and Salvation Creek, The Wishing Year will touch anyone who has ever made a wish.

The Wishing Year is a captivating memoir of one woman's courageous year-long journey to make her most fervent wishes come true. Taking stock of her life one New Year's Day, Noelle Oxenhandler found it sadly wanting. And so, stifling her doubts, she brazenly launched three wishes into the universe: for a new love, a healed soul and a place to call home.

So begins both a journey of self-discovery and a mystical exploration of the quintessentially human art of wishing- from primeval magic to contemporary belief in the 'law of attraction'. Ultimately, as Oxenhandler's wishes start to come true, she discovers both power of wishing and the truth behind the cautionary adage 'Be careful what you wish for'.

Noelle Oxenhandler is a long-time contributor to The New Yorker and her work has appeared in many other national and literary magazines, including The New York Times Magazine, The San Francisco Chronicle Magazine, VOGUE and O Magazine. She lives in northern California and is the mother of a grown daughter.