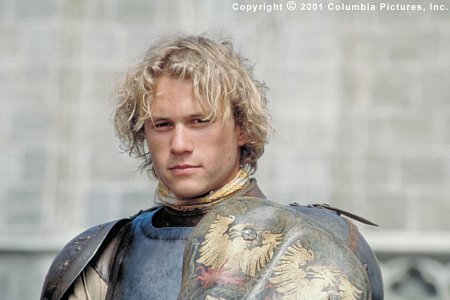 A year ago, Aussie Heath Ledger was a virtual unknown outside Australia. Since, he has graced magazines from Vanity Fair to Movieline, is dating Hollywood star Heather Graham, and now joins a growing list of Australian talents gracing movie screens all across America these days, a list that includes such names as Cate Blanchett, Nicole Kidman, and Geoffrey Rush. Ledger has quickly became a hot property in Hollywood and with his newest film, A Knight's Tale, a rollicking take on a classic genre, Ledger's star is truly shining.

In this very candid chat with Paul Fischer in Los Angeles, Ledger discusses the film, his reluctance to discuss his love life and his refusal to play by Hollywood's rules.

The red bandana that is draped across Heath Ledger's head says it all. Gone are the conservative slacks and tie the young Aussie wore to interviews when promoting The Patriot. Casual jeans, smart but funky T-shirt and that red bandana say it all. Far more assured than he was a year ago, it all begins with dressing the way HE chooses. "Believe me, they were down there trying to put on the slacks!", he says laughingly. But then more seriously he adds that he insists on being in control "Yeah. Fuck it, you know? This is ME. I'm not here portraying someone I'm not." In Los Angeles to flog his latest pic, the would-be summer blockbuster A Knight's Tale, Ledger says that he has become more his own person since doing "anything and everything" when promoting last year's The Patriot, because "you've got to stay in control and at least FEEL like you're in control somewhat of what gets released and what doesn't." The pressure is greater for Ledger this time around. He is the one starring in the movie, but only, the actor angrily insists, "because my mug's on the picture for the poster." Ledger doesn't feel the pressure, he insists, because any pressure was created by the studio, "so I'm not going to take it on, because, yes, it's A Knight's tale, but it's an ensemble movie. The way that the studios work is they find a product and they'll put it out there and make it. What THEY'RE trying to do is create a star in a big way. Now BANG, someone to put the pressure on."

Ledger won't be treated wholly like a commodity, he says. "Look I guess they wanted me to tour around 12 cities in America for over a month and I cut that down to four days. And it's not because I don't want to talk about the movie - of course I'm proud of it. The studios want to do everything in their power to make the movies good, especially when they're putting a lot into it like this one. So they're just passing the fucking pressure on over here, that's all. I've just got to say true to MYself and not look at myself and this movie and say: OK, I've done this movie and NOW I am a part and product of this corporation, and I'm going to do everything I can to BANG, promote that movie. Because while you're doing that, you're damaging yourself. " That includes caving into medika pressure to discuss his love life - notably his relationship with Heather Graham. "The media invests in your personal life: OK here's a story to sell and I'm going to invest in it now because we can fuckin' get some people in to read it. Look, I'm aware of that but I'm not about to sit down and talk about it." Ledger feels that movie studios manipulate and uses his personal life in this process of selling movies. "They're ruthless and don't give a shit about my personal life. It's all about numbers. Ultimately, the guys who run the studios probably don't even see the movie and at the end of the month are handed a sheet with numbers and they'll fire people upon that, not upon how good the movies are. That's it."

Yet at the same time, Ledger is more than happy to talk about A Knight's Tale, his second period piece in a row, in which the young Perth-born Aussie shows off his funny side. Inspired by "The Canterbury Tales", Ledger stars as William, a young squire with a gift for jousting. After his master dies suddenly, the squire hits the road with his cohorts Roland and Wat. On the journey, they stumble across an unknown writer, Chaucer. William, lacking a proper pedigree, convinces Chaucer to forge genealogy documents that will pass him off as a knight. With his newly-minted history in hand, the young man sets out to prove himself a worthy knight at the country's jousting competition, and finds romance along the way. Ledger admits that there are some interesting parallels between the actor's own real-life journey from small town country boy to movie star, jand that of William, in the movie. "Sure there is a little bit there, and it's part of my job to find those parallels so I can bring truth to what I'm portraying."

He says that he partly drew on his Australian heritage to play this character. "I guess it was his thing with class systems and that whole thing of the lower class not being able to step up. It's that kind of grudge, Australian, ex-convict kind of thing." Ledger and his co-stars, including Fully Monty's Mark Addy, arribved in Prague a month before shooting began in order to cement the kinds of friendships that permeate on screen. They managed to get some Czech drinking in at the same time. "I mean, fuck, you're in Prague, beer's 20c a pop and there's a pub on every corner. When in Rome, right?" As for working in Prague, where he spent close to six months, Ledger has mixed feelings on the city. "I don't know what it would be like as a tourist and I don't know if I'd go there as one. I have some fear for the Czech people who live there, because it's this beautiful, wonderful city, yet they were digging themselves out of the Communist trench, and the older people are still walking around in this kind of grey, hypnotised state. But the tourist industry has come in BAM. McDonalds is there - almost like Disneyland, yet the locals can't even afford to buy a Big Mac. You go there and you feel like: Wow I'm in Prague, but you're not. You're in a big, corporate, tourist-run city, so you're competing with that. But it's a really great place to work, because it's a tight-knit kind of community."

A Knight's Tale marks Ledger's first starring role in a film, and preparing to carry the movie, meant not thinking about the task ahead. "I guess I just wanted to be as relaxed as possible. I didn't want to go in there tense and too nervous and thinking of it that way. It was more or less I wanted to be excited on the fact that I had more time to create an arc for a character and I never felt the weight of a leading man and the weight that I was carrying the movie because I had a great ensemble cast with me the whole time. So, the only weight that I felt wasn't during the making of the movie but when I saw my mug on the poster, THAT was just slightly intimidating."

Ledger went straight from Knight's Tale into The Four Feathers, another period film but far darker than anything he had done previously. Based on the classic novel, Ledger plays a soldier in the 19th century branded a coward. "It is faithful to the novel but my portrayal of that was that he wasn't a coward and the fact that it was actually one of the bravest decisions he could have made, to leave and not go to war and not fight. I certainly follow that and stand by that and I would probably do the same thing. To me, the fact that he was labelled a coward, meant that he was actually a hero smuggled in amongst all that, a hero in his own mind to himself and that's in terms of being true to himself. He would have been a coward if he went to war because inside of him, everything inside of him said don't go. It's a coward to go against your instincts and he didn't. For that, he was brave." Ledger says this was the toughest shoot of his career "because we were still trying to get the script right during filming. Every day the script would change in the name of perfection."

Having worked solidly for over a year, Heath is happy to take some time off. "I'm going to take a break, six months. Hopefully a year if I can. I just feel I've got to put back the equivalent into life because 18 months of work just takes so much out of you. So, I've just got to put it back into my own life." During that time, he hopes to travel and embark on another love: Photography, "from portraits to landscaping. The last few years I've been doing a lot of print artwork. I blow up prints, black and white prints generally, and I scratch away on the surface. Then I paint on the prints and I scratch away and then paint on the paper underneath."

Ledger is less shy and more aware of himself than the first time we met on the set of Two Hands, longer ago than either of care to admit. Yet as brash and candid as he is, he still feels grounded amidst the superficiality of Hollywood. "I don't see why it's such a hard thing NOT to keep grounded, and keeping grounded is just a way of saying: How do you stay yourself? How do you NOT change into ANOTHER person? I find it hard to like CHANGE into another person. I don't want to and I don't feel the need to have to fill shoes and live up to expectations and be worried about people judging me, but who gives a shit? I DON'T. What I'M worried about is MY personal life, my friends and family, and THAT doesn't change. And as long as that doesn't change, I don't change."