The Winds of Dune 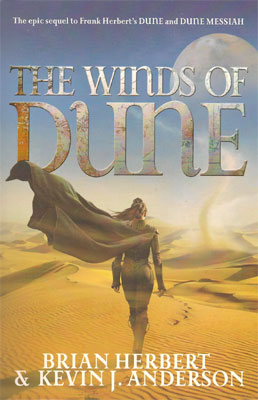 The Winds of Dune

After the reign of Muad'Dib, an empire begins to crumble.

Paul Muad'Dib - cheered as a hero, worshipped as a messiah, hated as a tyrant - has vanished into the endless deserts of the planet Dune, leaving his turbulent empire without guidance. Now it's up to his young sister Alia and his formidable mother, the Lady Jessica, aided by the faithful Gurney Halleck, the Fremen leader Stilgar and the resurrected Duncan Idaho, to keep the human race from tearing itself apart.

Fuelling the flames of dissent is the outspoken rebel, Bronso of Ix, doing everything he can to destroy the myth of Paul Muad'Dib, the man responsible for more deaths than any other in history.

Working with Princess Irulan, Jessica tries to uncover the truth about her son. AS the winds of rebellion and treachery brew, she discovers that Muad'Dib may have knowingly planted the seeds for his own downfall. And that Bronso of Ix has a secret mission of his own, one that will force Jessica to choose between the memory of her son and the future of the human race.