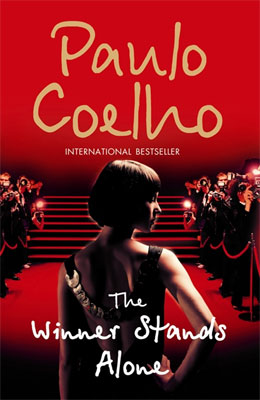 'When I decided to take a snapshot of my own times, I wrote this book,' says international best-selling author Paulo Coelho. In his 12th novel, The Winner Stands Alone, Coelho once again returns to the themes that have inspired millions around the globe: the search for out true self, the fear and price of fame, and how wealth, excess, and superficiality can lead to the loss of relationships and spiritual values.

A meditation on personal power and innocent dreams that are manipulated or undone by success, The Winner Stands Alone is set in the world of fashion and film, taking place during the course of 24 hours during the Cannes Film Festival. Igor, a driven and mega-wealthy Russian entrepreneur, is looking for someone to sacrifice in the name of love, to send a message to his ex-wife, Ewa. Believing that his life with Ewa was divinely ordained, he has told her he would destroy whole worlds to get her back. The conflict between an individual evil force-embodied in a serial killer- and society emerges as the novel unfolds and mortality is derailed.

We meet the players and poseurs behind the scenes at Cannes- the 'Superclass' of producers, actors, designers and supermodels, as well as the aspiring starlets, hopeful newcomers, has-been stars, and jaded hanger-on. Among them is Javits Wild, as an unsuccessful actor turned phenomenally successful independent distributor, who hides his ties to a cocaine cartel. Maureen, a filmmaker who emulates Orson Welles, zeros in on Wild as her ticket rich textures and fabrics of his Muslim homeland, has come to Cannes to seek backers for the first film. It is Olivia, the winsome street vendor, whose sweet beauty at first haunts Igor, before he comes to believe that her pure soul hovers over him like a saint as he mercilessly dispatches victim after victim. Circling them all are Stanley Morris, retired from Scotland Yard, and inspector Savoy, who envisions the new career that will open up for him, if he solves these murders.

'Since time immemorial, men have believed that being close to something unattainable and mysterious can bring blessing,' a friend once told Hamid. And so, all the players have come to Cannes to follow their dreams, seek their fortunes, and make real their early desires to shape the world and benefit society. Will they encounter blessings or betrayals? Facing danger and treachery, will they cast aside their humanity? And who is the true 'winner' of Coelho's title: the serial killer who slips away, or the young African model who makes a courageous, but potentially career-ending, choice to remain loyal to her lesbian lover and mentor?

Adroitly interweaving the character' connected stories as Igor sets his traps, in The Winner Stands Alone Coelho once again writes with the emotional depth, insight and compassion that have earned him the admiration of readers worldwide.

Paulo Coelho is a Brazilian bestselling author and is one of the most widely read authors in the world. Published in more than 160 countries, his books have been translated into 68 languages and sold more than 100 million copies internationally, with 9 million sold in the U.S. One of the most important literary phenomena of the 20th century, Coelho's The Alchemist has been or is a #1 bestseller in 74 countries, and has sold 35 million copies globally to date. He received the 2009 Guinness World Record for the most translated author of the same book (The Alchmist, which has been translated into 67 languages at the time of the award). His other titles include Brida, The Valkyries, By The River Piedra I Sat Down and Wept, Maktub, The Fifth Mountain, Manual of the Warrior of Light, Veronika Decides to Die, The Devil and Miss Prym, Eleven Minutes, The Zahir, Like the Flowing River, The Pilgraimage (Plus), and The Witch of Portobello. His book Veronika Decides to Die is being made into a film, shooting in New York City and England, and scheduled to be released in the autumn of 2009. Coelho writes regular columns and collabortates with media worldwide. He is a UNESCO special counselor, a Member of the Brazilian Academy of Letters, and a United Nations Messenger of Peace. He is the recipient of numerous prestigious international awards, among them the Crystal Award by the Wolrd Economic Forum and Fracnes's Chevalier de l'Ordre National de la Legion d'Honneur. Paulo Coelho lives in Geneva.