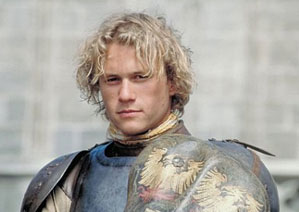 
Inspired by "The Canterbury Tales," this is the story of William , a young squire with a gift for jousting. After his master dies suddenly, the squire hits the road with his cohorts Roland and Wat. On the journey, they stumble across an unknown writer, Chaucer. William, lacking a proper pedigree, convinces Chaucer to forge genealogy documents that will pass him off as a knight. With his newly-minted history in hand, the young man sets out to prove himself a worthy knight at the country's jousting competition, and finds romance along the way.

There is something quite strange about a 12th century-set fable which opens with a group of eager peasants chanting to the strains of 'Rock Me'. Thus begins A Knight's Tale, a slightly amusing romp about a peasant's son with knightly aspirations, as he battles the jousting tournaments, with a little help from his friend and squire (an amusing Mark Addy) and, would you believe, one Geoffrey Chaucer. But as William, the Thatcher's son who masquerades as a knight, this film belongs to Aussie Heath. Giving a star-turning and dashing performance, which is at times comedic yet vulnerable, Ledger shows what he is capable of, and manages to rise above some of the lesser elements of this film. A Knight's Tale has splendid great moments - the jousting sequences are superbly executed, and a scene in which William is reunited with his father is delicately nuanced. It's a beautifully crafted film and when it sticks to period conformity, comes across stylishly. But in its attempt to shamelessly woo a teen audience, the film lets itself down with a ludicrous rock score that is out of step with the rest of the film, and dialogue that remains too contemporary for the period.

While Gladiator - which is thematically similar- was both contemporary yet true to its classic genre- Knights Tale tries to be too much for too many and never is able to strike the right balance. At over 2 hours, it can do with some strong editing and cut down the irrelevant music, so it resembles less an MTV movie on horseback.

As for the bloke from WA, however, he remains more unscathed, and in true Hollywood fashion, delivers the kind of performance that may well catapult him to the next level. This despite the movie's obvious shortcomings. This is one tale that could have been rewritten.