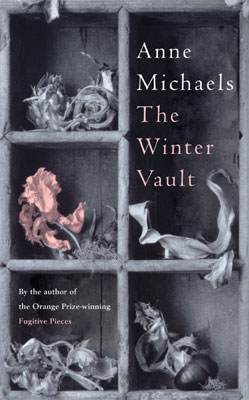 'The future casts its shadow on the past. In this way first gestures contain everything; they are a kind of map. The first days of military occupation, the conception of a child, seeds and soil. Grief is desire in its purest distillation. With the first grave… the invention of memory."

Egypt, 1964. The great temple at Abu Simbel must be rescued from the rising waters of the Aswan Dam. Block by block it is to be dismantled and resurrected sixty meters higher. The most delicate and daunting of task is overseen by Avery, a young engineer who at the same time is carefully, and joyfully, constructing a shared life with his new wife, Jean.

But not everything can be saved once the floodgates have opened. Villages will be deluged. Graves will be moved. Thousands will be exiled from their ancient homes and from the river that has been their lifeblood, and no feat of engineering can prevent this.

Weaving historical moments with the quiet intimacy of human lives, The Winter Vault tells of the ways in which we salvage what we can from the violence of life. It is the story of a husband and a wife trying to find their way back to each other; of people and nations displaced and uprooted and of the myriad means by which we all seek out a place we can call home. It is a breathtaking and heartbreaking novel about the inescapability of memories, the devastation of loss, and the restorative power of love.

Anne Michaels first novel, Fugitive Pieces was published by Bloomsbury in 1997 to worldwide critical acclaim. Fugitive Pieces won the Orange Prize and Trillum Award among others, and was short listed for the Giller Prize and the Canadian Booksellers Association Author of the Year Award. Anne Michaels has also composed music for the theatre. Born in 1958, she lives in Toronto.