The Weight of Silence & Interview 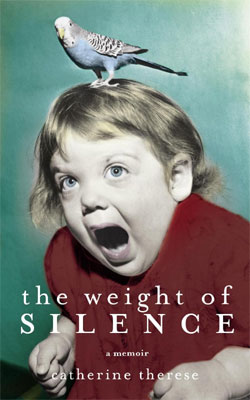 The Weight of Silence

In her achingly funny, heartbreaking childhood memoir, Catherine Therese takes the reader inside her head, and upside down on a unique coming-of-age rollercoaster. From picking her belly button in her backyard in Blacktown to hiding inside her wardrobe interpreting silence, to the bedroom of a boy with half a thumb, to the labour ward … The Weight of Silence is an unforgettable story of forgetting, pretending, remembering, of becoming who you are.

The Weight of Silence is the story of a girl growing up losing and finding herself in the secrets that shape her life. A father's drinking, a mother's shame, a daughters longing to hold a trouser leg, to hear someone say something about what never happened. The weight of silence - 9 lbs 4oz's. What happens when a girl becomes a mother before she's a woman?

Tell me a little bit about the background behind your book?

Catherine Therese : Well the story behind the story of my book is actually about my own journey from fear to faith and finding my voice whilst giving myself permission to actually tell my story.


Why did you feel you had to write this?

Catherine Therese : I have been writing a long time, the first draft of the book was when I was four, which is a bit embarrassing, it has taken me a long time to write it. I've been carrying the weight of silence inside me, ever since then. I've been writing ever since I was a child. I really got going with writing the book when I was 36, it took me eight years to write it.


Do you feel better now that the story has been written?

Catherine Therese : That's interesting. Do I feel better? I feel in terms of where I am at in my journey from fear to faith, I feel really cohesive. I didn't write the book to understand myself I wrote the book because I understand myself and understand primarily one of the main themes in the book is growing up in an alcoholic family and I've written the book to be able to share what I know and what I understand about the book, that experience with others. I feel cohesive but I am actually pretty terrified because it is a pretty exposing thing to do.


How does it feel to have written a memoir that everyone from publishers to publicity are praising because they generally enjoyed the book?

Catherine Therese : It's overwhelming actually, the book seems to be connecting to such a wide range of readers, it is about the things we keep hidden that we all have in common. I think that anyone who has grown up with a secret in their family are finding things within the book to relate too and it is very gratifying to be making those connections because primarily that is why I am a writer. I want to connect feelings with words and be able to then share that with a reader, that is special.


Do you plan to continue writing books?

Catherine Therese : Yes, I actually am looking forward to getting past this stage and just sitting back and waiting to see what comes up and grabs my attention next. I have a couple of projects in the works and I keep being asked if I am going to write a sequel to this one. It is tempting to actually write the journey from there to here because it ends 27 years ago. There has been a lot of living and growing since then and the life since then is what has enabled me to write the book, I just am going to have to wait and see how the dust settles after this decision.


How did it feel when you held your this book, your first?

Catherine Therese : It was amazing. Actually I was driving down King St and I saw a copy of the book in the bookshop window when I was stopped at the traffic lights. I looked over and I thought 'there you are, you couldn't be any other way than how you are, and there you are living independently of me'. I felt like a surrogate to the story for a really long time, the lights turned green and I drove off. I've done what I needed to do with this book, it was deeply satisfying to hold the book, knowing that I brought that to life.


Tell me about the cover:

Catherine Therese : It's not me! But that is exactly how I feel. The cover is a little girl with a bird sitting on her head, she is trying to hold herself with dignity but she looks like something awful might be able to happen, that is pretty much how I feel actually! I felt like that before I wrote the book, during the writing and now. The journey is the important part. I don't think I have anything to win or gain with the writing and publishing, it is actually the journey itself.


Catherine Therese Catherine Therese was born in 1965. She wrote the first draft of her memoir The Norty Girl aged four, acted it out for the next 36 years and began rewrites in 2001. In 2005 she was invited to the inaugural Varuna Masterclass. In between acts she's created poetry, prose and children in Australia, Belgium and Spain; studied Languages, Car parks, Colour and Design, and worked as a stylist, mentor and lecturer. She is a 2007 Varuna Fellowship recipient. The Weight of Silence is her first book. She is married with three children and lives noisily amongst trees in Sydney.