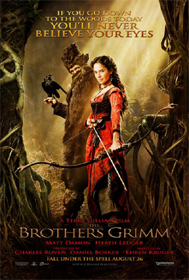 Synopsis:
From acclaimed director Terry Gilliam comes 'The Brothers Grimm', the adventures of legendary fairytale scribes, Will and Jacob Grimm (Matt Damon and Heath Ledger), two brothers who travel around the Napoleonic countryside vanquishing monsters and demons in exchange for quick money. But when the French authorities figure out their scheme, the con men are forced to contend with a real magical curse when they enter an enchanted forest where young maidens keep disappearing under mysterious circumstances. Many of their renowned fairytales including Cinderella, Little Red Riding Hood and Hansel & Gretel are masterfully woven into the story, as the Brothers Grimm are forced to confront all that their imaginations have brought to life in this epic battle between fantasy and reality.

My Verdict:
Filmed entirely on location in Prague, Czech Republic and set in the early 18th Century, the brothers Will and Jacob Grimm travel the countryside as scamsters, making a living out of ridding villages of evil spirits, ghosts and the like and reaping a tidy profit from their swindling. Along with their two accomplices, they love their life but this comes to an abrupt stop when the French General Delatombe and his sidekick Cavaldi discover their con. They are then sent off to a tiny village, Marbaden, to rid a forest that is possessed and to solve the mysterious disappearance of some of the young girls from the village.

They enlist the help of a local villager, Angelika and set off to destroy what they think is going to be another easy job but soon discover that the forest may indeed have a real curse upon it. Interspersed throughout are numerous references to fairytales that were written by the 'real' Brothers Grimm, including Rapunzel and The Frog Prince.

As the fictional Will (Matt Damon) and Jacob Grimm (Heath Ledger) cavort through series after series of events, some of these cross the line into pure fantasy, so that eventually, fantasy and reality are blended into one.

As the two brothers, Damon and Ledger are adequate with Damon having the character with more oomph and Ledger being the story-writing quieter sibling. Peter Stormare looks like he was having the time of his life as the hapless Cavaldi but too often his dialogue was indecipherable, which is very distracting and this was also the case with Jonathan Pryce as General Delatombe.

Director Terry Gilliam has created a chaotic story that is very often disorganised, messy and all over the shop. Some scenes seem to included just to utilise his black sense of humour with no real bearing on the story and some may even find he takes it too far with his use of animals as the butt of some of the gags - especially a scene involving a kitten being killed. But it's all very Gilliam in style and perfect for lovers of his approach but it may come across as too silly and brainless for those not used to his methods.