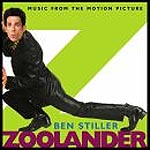 And now from one of this year's funniest films, comes music from the motion picture!

"I'm pretty sure there's more to life than just being really, really good looking, and I plan on finding out what that is."

What's the world's most famous male supermodel to do when he's dressed to kill and ready for action? How about stop an outrageous plot and become a model American hero! Derek Zoolander (Stiller) has faced off thousands of persistent paparazzi and defended his title of Male Model of the Year for three years running without even getting his hair mussed. But now the world's most famous supermodel is about to prove he's not just an ordinary really, really good looking stud in snakeskin. He is about to prove he's a hunk to be reckoned with when he faces off the evil fashion underworld and gives his millions of adoring fans a real reason to cheer.

Following the success of blockbuster comedies "Meet The Parents" and "There's Something About Mary", Ben Stiller now turns his attention to the fashion industry with "Zoolander", an original comedy based on a 1996 VH1/Vogue Fashion Awards character he co-created with "MTV Movie Awards" writer/producer Drake Sather.

The Zoolander soundtrack is OUT NOW!