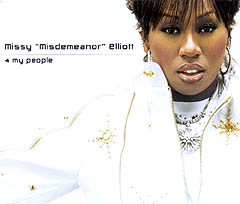 Her latest single "4 My People" also features fellow rapper and Missy's comrade-in-Divahood EVE on the mike. "4 My People" has a catchy bass line and chorus that is complemented by electro sounds and wicked beats. This single will be a hit in clubland and is bound to receive massive radio airplay.

"4 My People" is taken from her third successful album "Miss E...So Addictive", which has been described as her finest work to date.

Missy scored her break in 1991 with the group "Sista" but once that folded, she went on to write and produce music and even lent her vocals on tracks for Jodeci and the late Aaliyah. Establishing herself as a solo artist, and three albums later, Missy continues to redefine herself and her music.