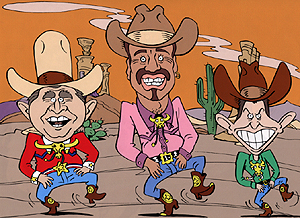 George Michael is BACK and making waves once again! In addition to its satirical subject matter, which questions the cosiness of Tony Blair's relationship with George W Bush, "Shoot the Dog" has an infectious and uplifting melody (incorporating a sample from the Human League's "Love Action") which is set to make the track a dancefloor and radio smash.

The video to accompany the single is an animated satire created by the makers of the popular TV show 2DTV and perfectly projects the humour at the heart of the lyrics.

Both "Shoot the Dog" and the recent single "Freeek!" will feature on George Michael's - as yet untitled - forthcoming album.

"Shoot The Dog", written and produced by George Michael, will be instore from 5th August through Universal Music.

Read Femail's Star Snapshot on GEORGE MICHAEL & learn more about the man himself!