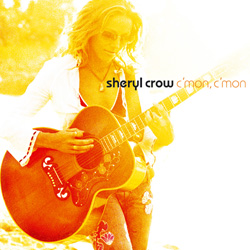 The music of Sheryl Crow has long reflected the musical passions that inspired her back when she was growing up in Kennett, MO. From her breakthrough debut Tuesday Night Music Club (1994) to the self-titled Sheryl Crow (1996) and her most recent studio album The Globe Sessions (1998), Crow has continued to explore her passions and define her distinctive voice, staking her fertile turf as a singer-songwriter. Now with her latest shining gem, C'mon, C'mon, Crow has turned up the volume and loosened the mood to make the direct rock & roll album that made her want to make music in the first place.

C'mon, C'mon is an instant charmer of a rock album - an immediate road trip classic. For Crow the making of the album was a long, hard road. Indeed, even coming up with an appropriate title for the album seemed to take forever. "The original album title was going to be Songs from the Waiting Room because all the way through the process of making this record that title had a lot of meaning for me," says Crow. "But that title was in conflict with the spirit of the record."

Crow explains that she yearned to make an album "in the flavor of '70s and '80s classic rock - rock songs that were crafted, that you could sing; songs that were like the soundtrack to your summer - songs that were really committed to rock." And so it was that Crow found herself with a kick-ass album and no title to match. At the eleventh hour she speedily wrote and recorded the song "C'mon, C'mon" - a standout, crunchy rocker featuring Crow's longtime friend Stevie Nicks. "It just seemed to evoke the feeling of the rest of the record," Crow explains. And "C'mon, C'mon" is definitely an album with lots of feeling.

Shortly before the album's release, Crow had this to say about her new album and its contents:

Is it safe to say that the overall vibe on "C'mon, C'mon" is more upbeat than in your recent work?

I'm not sure I would wish my recording process on anybody else, but it usually winds up as a full circle experience. I usually go through this process of making a record when I go in: I have a pretty good idea of what kind of record I want to make and then I wind up making the exact opposite kind of record. And then in the end I look at it and it unfolds as being kind of what I wanted in the first place. In the last stage of making this record I sort of had a re-energizing experience that culminated from crashing in the middle of it.

I had a couple of really down experiences that were not related to anything other than the fact that I had just been so overworked for the last few years. I allowed music to become my life instead of something that I do and my life being my life. I had Chrissie Hynde down to the studio to visit and I was sort of commiserating with her about how hard the business is and what it's like to be a woman. I said I just sometimes feel like I don't want to do it anymore, and I don't know what I'm writing about anymore, and I can't seem to finish anything and it's taken me longer to make a record. She said you have to realize that music is something that you do, it is not your life. And at that point I realized, if I didn't do it anymore, it would be okay, and life would still hold meaning. And with the freedom of knowing that, the record came together and really, weirdly enough, it was like having a rocket engine lit beneath it.

Chrissie Hynde doesn't appear on C'mon, C'mon but many other old and new friends of your's do. How do you feel about the fact that the album is so star-studded with the likes of Don Henley, Emmylou Harris, Dixie Chick Natalie Maines, Liz Phair, Lenny Kravitz and Doyle Bramhall III?

It's kind of weird because when I got to the end of making the record I realized that there were a lot of people on this record and I got really worried about it. I got worried about how they all would be perceived and whether it would look like I was capitalizing on my relationships. But I realized that above all else, I really needed some support on this record emotionally. So I called people that were really good friends of mine, friends who have been kind of through the struggle with me. To have been really great allies just feels like a natural organic progression.

How did you hook up with Liz Phair (who appears on "Soak Up The Sun")?

Liz was playing basketball at the side of the studio, causing all kinds of racket. I came out ready to snap at somebody and there was Liz. Instead of yelling at her, I dragged her into the studio.

Let's talk about some of the tracks on C'mon, C'mon. First of all, there's "Steve McQueen." That seems like a song that salutes two Steves Steve McQueen and Steve Miller.

It's a shameless tribute to Steve Miller. Actually Steve Miller was a name I tossed around when I was thinking about making this record. I was thinking of the albums and the music that were really kind of the soundtrack to my early rebellious years - right after getting my driver's license, driving around town, circling the A&W, listening to rock radio (which was Rumors and Heart and Steve Miller and Lynyrd Skynyrd and Peter Frampton). After coming off the Central Park gig I really wanted to follow up with the rock feeling. I wanted to go and make that record, and to me it is kind of Steve Miller-ish "Fly Like an Eagle" or something by The James Gang. And that song metaphorically I think represents that sort of yearning to be wild and free. I think Steve McQueen was kind of the archetypal rebellious free-spirit - mysterious, heroic, American - and what he represented (in my mind at least) was just that: all those things - that free-spirited kind of no-holds-barred living, and how we sort of lost that kind of open-wide America. It's kind of a loss of innocence song.

Where did "Soak Up The Sun" begin?

The lyric came about during one of the lowest points of this record you can imagine and it wound up being the most upbeat song. But it's kind of a social commentary on the amount of minutia that just clutters our lives and how we sort of miss out on the moments that kind of tick by. I was at a point where I was just feeling like wow, I'm spinning my wheels. I'm not sure what I'm doing, and every day that goes by, you can't get it back. It's really a song just about yearning for the simple things, you know.

What was it like collaborating with your sister on "It's So Easy" the duet with Don Henley?

I went down to Nashville actually because my sister is a country music songwriter, and I went down to write some songs with her too. We wrote the song "It's So Easy" actually for another artist, and I called Jimmy Iovine at Interscope Geffen A&M Records and I said my sister and I wrote this song, it's a really good song. It's a waltz. It was in 3. It was 6/8 basically, really country. He said, 'Well let me just hear it.' But he loved the song and he called me and said `You have to do it.'

I've known Don Henley for 14 years. And it was so cool with him because he was one of the first recording session back-ups I ever did. And the song was always kind of meant to be a duet. It definitely has a male-female relationship in it. It's basically about people who are in a clandestine relationship that know that it's wrong, but it's so difficult to unattach or detach from it, which is kind of a universal feeling. I don't know how many people have experienced being in an adulterous relationship, but definitely everybody has experienced being in a relationship that they knew was not suitable or whatever. But anyway, he's the king of country rock and also I love him.

What inspired "You're An Original," which features Lenny Kravitz?

"You're An Original" is, you know, more social commentary. Really the lyrical content of this record is based on the fact that just as a spectator watching what's going on in pop music, it's become the norm now to feed the American public - or maybe even the world public - things that are totally digestible and understandable. We don't really want things that are really original and I have so much respect for people who actually wind up coming out with something original.

How did you end up working with the great Emmylou Harris on "The Weather Channel"?

I was in Nashville right after September 11th, in fact, it was probably like maybe the day after or two days after. It's really weird. And that song already came in such a dark place. I called Emmylou and said, 'I really want your voice on this song,' because her voice for me exemplifies something deeper than an earthly voice. For me it's so spiritual. Her voice is the most healing if I was sick I would just put her on a loop and listen to it over and over, and I know I would be healed.

What kind of impact do you want C'mon, C'mon to have?

It is a confusing time because if you do watch what is going on in pop music, then you might think that it's all 13-year-olds who are buying records, and I know that I would be really lucky if I got some 13-year-olds buying my record. But I feel like I'm lucky. Hey, I'll take their money. But I feel lucky if anybody buys my record, so I kind of never know who's out there buying it, and the only thing that I would really care to say or I would desire to have happen is that this record have the kind of impact that the songs when I was growing up had. I loved the songs I grew up with so much and they really did create the cinematography to my summers and to my winters and to my falls and to my springs, each associated with events in my life you know, proms or getting my driver's license or, you know, the first time I got grounded. Hopefully people will find something on the record that has meaning for them also represents freedom and individuality and the definite feeling that anything is possible.