Michael Crawford - the best of... 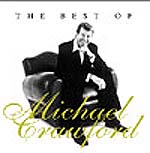 Introducing THE BEST OF MICHAEL CRAWFORD

Michael Crawford is an absolute show business phenomenon, just mention his name to someone and watch the way they smile.

"Today, while he may sit atop the world of show business - a truly outstanding performer, adored by millions - Michael is still shy and uncertain away from the safety of his public stage. Nobody in show business has the legions of loyal fans that Michael has. He has a rare charm and warmth - there's that word again - and a talent that's unmatched on the musical stage. Or recordings.

Michael Crawford always sings with a rich, intimate style that magically makes it seem he's singing JUST FOR YOU. The funny thing is, that's precisely
what he is doing!" (Ray Martin)

Michael Crawford's success as a record selling entertainer is unprecedented. His albums "A Touch of Music" is 4 x Platinum, "Performs Andrew Llyod Weber" is 3 x Platinum, "On Eagles Wings" is Platinum, "Favourite Love Songs" is Platinum and "In Concert", "With Love", "Songs From Stage And The Screen" are all Gold. His latest Album "The Disney Album" was # 1 and has sold more than 100,000 units (Platinum).

All in all Michael has sold more than 1,000,000 units in Australia! And the new "The Best of Michael Crawford" will be an Australian/New Zealand release only. Featuring a vast collection of classic songs as well as a duet with Barbara Streisand, this compilation provides a fine listen.