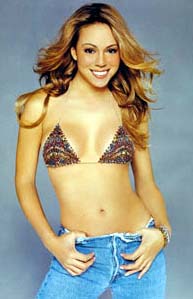 Other info:
Mariah is the only female artist who had 7 albums go triple platinum in the US. She is the only artist with three debuts at #1 and she was the first artist who's first 5 US singles reached #1.

Siblings: She has a brother Morgan and a sister named Alison.

Quotes: "There is a light at the end of the tunnel...hopefully it's not a freight train!"
"It's not a realistic goal, it's not a realistic thing and if you have that attitude, it's NOT realistic...."
"A lot of people are singing about how screwed up the world is, and I don't think that everybody wants to hear about that all the time."
"I'm not one of those people that goes into details of my personal life on national TV to get attention. Some things are better left unsaid"
"Butterflies are always following me, everywhere I go."