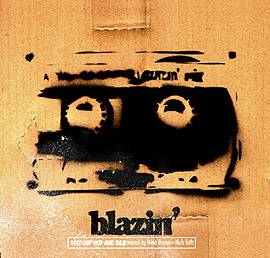 Representing the diverse aspects of contemporary urban music, Blazin' offers the best of both worlds from two of Sydney's leading hip hop and R&B DJ's, namely Nino Brown and Nick Toth. Spanning from mainstream pop R&B all the way to underground hip-hop, with a healthy dose of local artists thrown in the mix, Blazin's appeal will be two fold. It will appeal to the core hip hop market's appreciation for quality tracks and the 'mixtape' concept, and the careful selection of popular urban tracks and artists will draw in the greater market of urban music listeners. In doing so Blazin' will broaden the awareness for the depth of amazing hip hop music that is currently available but not always heard on commercial airwaves.

Nino Brown and Nick Toth have been at the helm of pushing fresh sounds in clubs, on the radio, at festivals, national tours, etc and contribute their supreme turntable skills and decade long experience to this compilation. Read more about Nick Toth in this month's MALES UNMASKED.

This double CD includes the following:

This wicked album will be blazin' into stores from September 2nd.