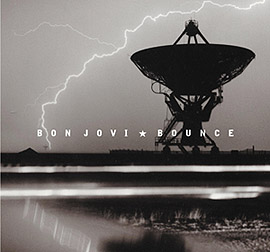 Some say forget the eighties and all the fashion, music and movies that came from this era. But a band that has stood the test of time through the 80's, 90's and today are Bon Jovi. Their eighth studio album "Bounce" proves once again that these rockers still have the raw passion in them to create something very special.

The sound we have come to love from Bon Jovi is still very much present. In the tradition of Bon Jovi greatness, "Bounce" is full of rock songs and powerful ballads. The lyrics are strong, yet tender and true, telling a definite story of the bands journey over the past few years.

"Undivided", the albums first track is about the September 11 tragedy. I was expecting a ballad, but in their true style, a rock song has been delivered, not only focusing on the loss, but on the strength and friendship that has been gained by people uniting around the world as one.

"Everyday", the first single release from the new album has already given Bon Jovi a Top 10 Aria hit and follows the song "Undivided". The message of the song is pretty simple, "live life like there is no tomorrow". The songs that follow all tell stories and deliver messages that have evidently been composed and written from within, offering honesty and inspiration.

"Hook Me Up", "Love Me Back To Life", "Bounce", "Misunderstood" and "The Distance" all deliver that traditional Bon Jovi rock sound, incorporating some wonderful guitar riffs and memorable vocals.

It was hard to choose a favourite from the album as they are all standout tracks but the songs that impressed me the most was the ballad "You Had Me From Hello" and the rock songs "Everyday", "Hook Me Up" and "Bounce". "You Had Me From Hello" delivers a great love song, exploring the true meaning of someone being in love and being in a relationship that continues to grow through the years. "Hook Me Up", an excellent rock track, tells the story of a Palestinian man who is trapped and who is trying to make contact with someone to get him out of danger. It has been written from the perspective of a young person, who is trying to seek help in their life relating to a problem or situation they are facing.

Another great song, which is bound to be a classic, is "The Right Side Of Wrong". This song is a return to the "Wanted Dead or Alive" sound and is an upbeat ballad, again telling a story of good hearted friends who are looking for a better life.

I have only had the opportunity to see Bon Jovi LIVE in concert once, way back in the early nineties. They were supported by Jimmy Barnes and (believe it or not) Dogstar (yes, Keanu Reeves' band!). Luckily for me, I was one of about 300 people who got to sit in the golden arch, within 10 meters of the band on stage. Behind us, a sea of around 10,000 screaming fans were packed in together. The show was amazing. The one thing about these guys is that they can, in true rock fashion, cut it in the studio and LIVE. If you get the chance this time around, make sure you catch the Bon Jovi guys live.

The latest Bon Jovi album as a whole is an amazing collection of stories; each song delivers something different, yet adding to the bigger picture of the messages that are being relayed.

WHO SAYS ROCK IS DEAD? Certainly not Bon Jovi! "Bounce" is another album delivered in superb Rock 'n' Roll fashion. If you love classic rock and ballads, "Bounce" is definitely one album to add to the CD collection, whether you are a die-hard Bon Jovi Fan or not.