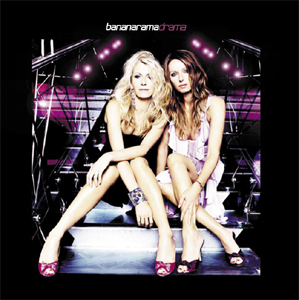 It's tempting to say that Bananarama rewrote the pop rulebook. The truth is that they never even read it in the first place, but for over twenty years their name has been synonymous with bright, sophisticated and authentically brilliant pop music.

'Drama' is a slice of gorgeous glitterball disco-house & electro flavoured pop. It's the perfect comeback from the original queens of and will please the old fans as well as win over new fans that listen to the Sugababes and Kylie Minogue. It also features new remixes of the girls' classics - 'Venus' & 'Really Saying Something.'

TRACKLISTING:
A01 MOVE IN MY DIRECTION
A02 LOOK ON THE FLOOR - (HYPNOTIC TANGO)
A03 WATERFALL
A04 FREQUENCY
A05 FEEL FOR YOU
A06 DON'T STEP ON MY GROOVE
A07 MIDDLE OF NOWHERE
A08 I LOVE THE WAY
A09 LOVEBITE
A10 RULES OF ATTRACTION
A11 YOUR LOVE IS LIKE A DRUG
A12 VENUS - MARC ALMOND'S HI NRG SHOWGIRLS REMIX
A13 REALLY SAYING SOMETHING (SOLASSO REMIX)

The achievements speak for themselves: more hits than the Spice Girls, more albums sold than Atomic Kitten, more Band Aid appearances than the Sugababes, an entry in the Guinness Book of Records as the biggest girlgroup since The Supremes. But it's not just what Bananarama have done - it's the way that they've done it.

In 2005 Bananarama are still creating thrilling pop moments - this has already been a fabulous year for Keren and Sara, in the build up to the release of their forthcoming album 'Drama' the girls have achieved two no 1 Dance smashes and their return to the Top Twenty with their hit 'Move In My Direction'. Continuing to sell out massive clubs like G.A.Y, headlining Rome Pride in Italy and performing as the special guests with the Scissor Sisters at one of the most exciting secret gigs of the year, Bananarama are well and truly back. But more of 2005 Bananarama later.

From the moment their debut single charted at a modest Number 93, through the triple-platinum albums and a million-selling Greatest Hits compilation, right up to date with new material set to knock the spots off any other pop group on the block, Bananarama's story is one of a self-created, anarchic, and decidedly modern pop group with a f&*k-you attitude that makes Courtney Love look like Karen Carpenter.

Most jarringly, at least in the context of today's pop personalities, generally existing as crass multimedia 'entertainment' brands, there was no Bananarama franchise. Endorsement deals were routinely dismissed - in the late 1980s they turned down a $1m hair curler endorsement deal with Clairol because, according to Sara, "we just didn't use Clairol hair curlers". There were no TV shows, no dolls, no scooters and no lollipops. Bananarama didn't need those deals to pay the rent, because Bananarama made music for a living. They still do, and it sounds fresh, contemporary and irresistibly danceable. New tracks like 'Move In My Direction' and 'Don't Step On My Groove' represent Bananarama's best work in over fifteen years, but they still fit in perfectly with the rest of the band's oeuvre, and there's plenty more where those new songs came from.

Most of the new material is the result of Sara and Keren once again identifying their perfect collaborators. In the early 1980s they approached producers Jolley & Swain on the strength of their work on Imagination's 'Bodytalk'; a few years later they heard Dead Or Alive's 'You Spin Me Round (Like A Record)' and decided to work with Stock Aitken & Waterman on 'Venus'. (Waterman, with typical understatement, later recalled that "it was almost like being asked by the Supremes to produce their records".) Now, in 2005, Sara and Keren's eagle-eared appreciation of the current pop/dance sound has led them to Sweden, to the contemporary hit making team Murlyn, who recently worked with the likes of Brittney and J-Lo and, in particular, to the team's electro hotshots Korpi & Blackcell.

The results are astonishing - close your eyes and Bananarama sound like singers half their age. Open your eyes and they don't look far off it either, but theirs is a career which, from humble beginnings, spans over two decades. Having both moved to London in 1981, childhood friends Sara Dallin and Keren Woodward soon made the city their own. They became regulars at Taboo and the Wag Club ("Blitz was over"), partying their way through the capital and working evenings at the Marquee club to make ends meet. (At that time U2 were a permanent fixture down at the Marquee, but Sara never heard them because she was "in the cloakroom, going through people's pockets".) One night, having been thrown out of the YWCA "for keeping late hours", Sara and Keren bumped into Sex Pistols drummer Paul Cook, who invited them to live in the dingy old rooms above the Pistols' rehearsal room. It was inevitable that with Johnny Rotten's drawings on the walls and Sid's old bondage trousers in the cupboards it didn't take long for Sara, Keren and new friend Siobhan Fahey to form a band.

One play from John Peel was all it took to catch the attention of The Specials' Terry Hall, who tracked the girls down and asked them to perform on Fun Boy 3's 'It Ain't What You Do It's The Way That You Do It', which eventually stormed into the Top 5 in 1982. Keren remembers the band's shock at Terry's initial interest: "We thought, 'My God, he thinks we're proper singers'." They went on to support everyone from Iggy Pop and Paul Weller (with the latter writing a song on the band's first album), but those early days were strange times. The girls were on Saturday morning telly, but still using the baths and the local swimming pool for 10p a throw. "We just didn't get paid," Sara laughs. "We signed for no advance, because we didn't realise you were supposed to get an advance, and we were still signing on when we were in the Top 5. We had to get a bank loan to pay ourselves Ł45 a week." Adds Sara: "We didn't think it would get past one single, and we didn't really care."

The girls' nonchalance clearly hit a nerve, with fans of all ages. Their faces beamed out from a huge variety of front covers, from NME to Look In, The Face to Smash Hits. For the next ten years the girls were everywhere, and so were their hits, whether it was 'Rough Justice' tackling the political tensions in Northern Ireland or 'Love In The First Degree' pioneering the relationship-as-courtroom-drama extended metaphor more than a decade before 'All Rise' was even a twinkle in Lee Ryan's eye. Bananarama soon became internationally hot property, with 'Venus' scoring a US Number One and 'Robert DeNiro's Waiting' paving the way for the now legendary meeting between the girls and that Hollywood superstar - "I've no idea what we talked about, though," Sara chortles. "We'd had a few!"

Along the way Bananarama defined their times, also turning in curiously timeless pop music - which is why artists from Steps to Ace Of Base have delved through the Bananarama back catalogue for hits, and why a bootleg of 'Really Saying Something' was recently Number One in Europe. Even when Siobhan moved on for great success with Shakespears Sister and through the arrival and departure of Jacquie, Sara and Keren have kept the band as alive and exciting as it's always been. They have never turned Bananarama into a nostalgia-fest. You won't have seen them on a Never Mind The Buzzcocks identity parade, or on Reborn In The USA, or Hit Me Baby One More Time, or on any of the Here & Now tours. The simple reason for this is that while it may be fascinating to look back over the last twenty delicious years of pop, the present and the future are even more exciting.

Now signed to independent label A&G Productions - allowing the girls the autonomy necessary for their ideas to thrive - Sara and Keren feel at their most invigorated for over a decade. "Writing songs now is giving me the same buzz I got when I was a teenager," Keren beams. "We're having fun making music all over again." Recording with the Murlyn crew in Sweden - in a massive house in the middle of a snow-lined forest - has clearly proved an agreeable backdrop for Sara and Keren's songwriting talents. The quality of the songs is astonishing - from blending the Moroderized synth stylings of the late 1970s with the cutting edge electro sound of 2005 in 'Lovebite', to the undulating, minimalist grooves of 'Look On The Floor'.

Bananarama have never played the game. Sometimes they haven't even known what game they were playing. But after almost 25 years, here, they are with some of the strongest material of their career: everything you'd have hoped, but nothing you'd have expected, totally modern, totally pop, totally Bananarama.