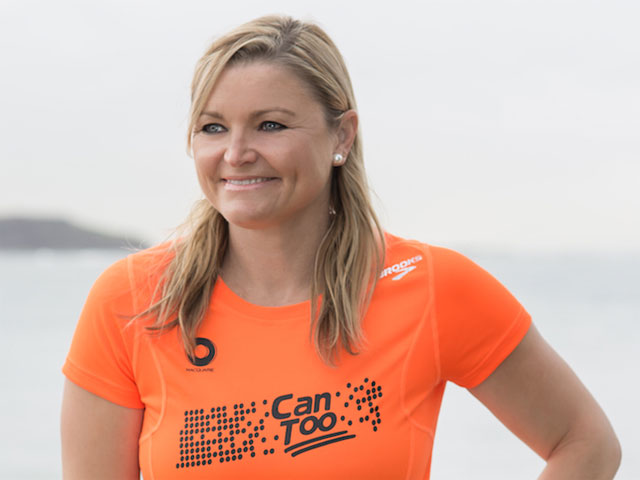 Having raised over $16 million for cancer research since its inception in 2005, Can Too, an Australian non-profit health promotion foundation that matches fitness incentives with a good cause, has kicked off its winter running season in Sydney, Melbourne, the Gold Coast and Newcastle and there's still time to sign up!  So as the mercury dips and temptation to take your foot off the exercise pedal increases, Can Too Ambassador and former Australian Olympic sprinter Melinda Gainsford-Taylor says it's the ideal opportunity to combine your fitness goal with finding a cure for cancer.

Melinda, arguably Australia's greatest female sprinter of all time, is one of the 11,500 Australian men and women who have signed up to Can Too and received professional coaching as part of a team to run or swim in various endurance events – including runs from 7km to full marathons, ocean swims, trail runs and triathlons.  In return, participants raise sponsorship dollars that go towards funding cancer research in Australia.

Having lost her Mum to cancer in 2015, Melissa successfully completed her first marathon after training with Can Too in September of the same year.   "As someone who was used to training for events that were over in seconds, the thought of running a 42km marathon was way out of my comfort zone," she said.  "Thankfully, Can Too's running programs are designed to help people of all fitness levels and abilities achieve their fitness goals, and after 20 weeks of Can Too training, I was able to realise my goal of running a marathon in memory of my dear Mum, while raising much needed funds for cancer research.  It's by far one of the most rewarding things that I have ever done," she said.

Can Too's CEO Susannah Miall says that Can Too is all about making what seems impossible, become achievable, whether that's completing a half marathon or finding a cure for cancer.  "We have many participants who have never run or swum in their lives and go on to reach their own personal running or swimming goals, while raising thousands of dollars for cancer research.  We are thrilled that Melinda will be joining us for a second year as an ambassador for Can Too – she is an inspirational role model and a tremendous advocate for our work," she said.

To help you get serious about running this winter, Melinda offers the top tips that helped her prepare for her transition into distance running:

Prepare For The Excuses

Hitting the snooze button in favour of stepping out onto a cold bedroom floor and scourging for clothes in the dark will always seem like the better option than a morning run at 5am, cautions Melinda.  To keep those early morning excuses at bay, Melinda advises you prepare for your morning run night before.  "Make sure you lay your running clothes out so they're easily accessible and ready to step into as soon as you get up," she says.  "You can also lay your keys, drink bottle, iPod, whatever you take on your run, by the door for a quick getaway," she adds.

Get Puffed For A Purpose

Training for a marathon, half marathon or even a 9km fun run can become tiresome at times and it's likely that your motivation will fail you at some stage.  "Knowing that you're training for a bigger cause can give you the extra incentive when you really need it," says Melinda.  "Having lost my mum to cancer, I know all too well the devastating impact that it can have on an individual and their loved ones, and I find it so motivating to be running for a cause that will help stop cancer from taking more lives in the future," she says. "When I don't feel like running, or can't be bothered to exercise, I remind myself of the greater good it's doing and it makes all the difference," she adds.

"When you're starting out make sure you don't increase your running distance by any more than 10 percent per week," advises Melinda.  For example, if you run 5km one week, wait until the following week to increase it to 5.5km.  "New runners or those getting back in the swing of running are prone to injury, and going out too hard can cause a lot of damage," warns Melinda. "If you're training with a group like Can Too, the running coaches will know how hard you should be pushing yourself and will be able to prescribe distances that are suitable for your ability," she adds.

Believe it or not, according to Melinda, you should be able to hold a conversation and talk in complete sentences while you run.  "One of the things I love about longer running is the social aspect, I'm used to sprinting and there's no way you can have a good natter while doing that!" she says.  "I have made so many new friends through Can Too and I really looked forward to the training sessions where we could all catch up and have a good chat while running," she says. Melinda advises that this rule doesn't apply for speed sessions or time trials where you should be running to 80 to 100% of your capacity, which means no time for talking!

If you want to become a good runner, running is the only way you'll get there, however runners who ONLY run are generally prone to injury so you should really mix it up if you can, advises Melinda.  "Depending on how much time you can dedicate to training, you should definitely throw a couple of weight or cross training sessions in the mix," she recommends.  "Three running sessions a week is fine, however if you're training four or more days a week, incorporating low impact disciplines like swimming, cycling and weights can help to increase your strength and fitness without all the impact," she adds.

To avoid overheating, Melinda recommends dressing for runs as if it is 10 degrees warmer than the weather indicates.  "In winter it is easy to over dress and you'll always be quite cool to start off, but you'll always warm up," says Melinda.  "Dress for how you will feel mid-run and make sure you always wear breathable fabrics that don't cause irritation or extra sweat," she adds.  "And make sure to bring warm clothes to change into as soon as you're finished!"