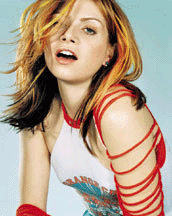 Need a fresh dose of Vitamin C? No not the tangy orange vitamin supplement that was pushed on you in your childhood, but the plucky New Yorker who can be defined as America's latest singer/actress/pop culture luminary, and who not unlike an orange, packs a unique zest of her own.

Recently blasting onto Australian shores like a great orange tidal wave, Vitamin C is here to promote her second album 'More', two new singles 'Graduation /Friends Forever' and 'The Itch', AND also, the soon to be released horror flick 'Wes Craven Presents: Dracula 2000' which she plays 'Lucy', a good-girl-gone-bad, and wait there's more, another film 'Getting Over Allison' which co-stars Ben Foster and Kirsten Dunst.

"With not only a Mattel Doll, but also a Tommy Hilfiger lippy created in her image, Vitamin C seems to be making the most of her time as Americas latest 'It' girl."

I recently caught up with Ms. C (aka Colleen Fitzpatrick) and was pleasantly surprised to discover this yellow-haired dynamo came across as being more bona fide than a pre-programmed pop-fembot. As a child, she preferred to dabble in writing stories and plays instead of watching TV. Shock horror! And over recent years, this limelight-lover has boggled many eyes with her peppery appearances on 'The Tonight Show', The Rosie O'Donnell Show, The Billboard Music Awards, and Hollywood Squares to mention a few. With not only a Mattel Doll, but also a Tommy Hilfiger lippy created in her image, Vitamin C seems to be making the most of her time as Americas latest 'It' girl.

The Graduation song is a single off the album 'More'. Is this for all the high school kids breaking for summer?

"I was inspired more by 'friendship' than graduation per se" Vitamin C explains her song, which no doubt will be a summer chart-topper, "It's not actually written from the perspective of a high school grad or in an anthemed 'school's-out-for-summer' style. There's a bit more to it than that. The main message is about 'transition' and the idea that no matter who you are or where you are from - friendship is a constant in most people's lives and it's important in times of need".

So the whole 'Graduation' concept is more like a metaphor for moving through all phases in our lives?

"Absolutely. I basically set it in 'that' timeframe for a variety of reasons. I was initially inspired about the song by my best friend, who I have been friends with her since we were little girls" she contemplates. "I've learnt how difficult it is to stay in touch with some friends as you get older. It's almost a celebration of friendship. When something is winding to a close and another thing beginning, it can be a really confusing and life-changing experience. This may first be experienced with graduating or when you let yourself fall in love".

Out of interest are you still friends with your high school buddies?

"There is one person I talk to all the time, and the other two I am in touch with very rarely", she admits "but I still know what they are doing with their lives and they know what's happening with me."

"Have you ever woken and wanted a new boyfriend, to quit your job, move to Tibet and transform your whole life? That's the Itch!"

I take it 'The Itch' is not about some infectious disease!?

"..(laughs) No, it's related to 'the seven year itch' and is more directed at people who are in relationships. In this particular case, a girl is not being provided with what she needs and she 's feeling the itch for something more. It's that feeling that you get when you are stir-crazy and you are itching to do something new. Like have you ever woken and wanted a new boyfriend or to quit your job. Move to Tibet and change you whole life? That's the itch!"

So how does it feel to have a Barbie-esque doll created in your image?

"I was very flattered" she beams, "its very surreal thing to have a doll made after you. It's great, cos I figure I'll always be present at my mothers dinner table no matter where I am."

And the Tommy Hilfiger lippie?

"Yeah I was approached about being involved in this makeup line they have named after artists. I thought it would be fun to be 'immortalised' in lipstick form, so a 'Vitamin C' shade was produced......... but no one buys it cos it's an orangey shade!

"I had a teacher a long time ago who said to me 'I wish you the worst luck in the world'..."

What the biggest lesson the year 2000 has taught you?

".... to not give up. I went through some tough times, especially with the Friends Forever single. There were some hills and valleys along the way, and I really just persevered. I could have easily just given up and gone home. Staying focused is probably the hardest thing in the world to do. You have to really be in touch with what you want, and have a state of balance, and that balance will hopefully help you to stay focused and project what it is that you are looking for" Vitamin philosophises, "that's so much easier said than done. I mean if anything...that s probably the greatest lesson I have ever learnt...and that has nothing to do with 'career', but more with relationships and growth and happiness. I had a teacher a long time ago who said to me 'I wish you the worst of luck in the world' when I graduated". Gasp! "The method behind his madness was", she explains, "Why would I wish you the best? The best of everything teaches you nothing - the worst teaches you life lessons, it makes you struggle, learn and fight. And I've come to agree with that. Also," she grins, "I've learnt to keep following the Itch!