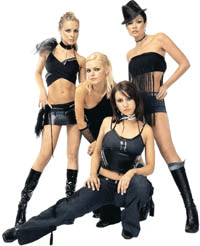 The Popstars project - a basic but nevertheless, clever business venture. 'Search the Country for the next 'all girl' band, get the entire population (well nearly) absorbed in the discovery, of Australia's Spice girl prototypes'. It's 'Brilliant!' A sure fire formula, why wouldn't the Popstars project create an overwhelming response from the public! After all, hasn't the life of a Popstar been every girl's fantasy at one stage or another?

Times have certainly changed; Ten to fifteen years ago was the beginning of the Popstar era and while the true experiences of a popstar were eluding a naïve public, innocent teens in the eighties were mystified. They watched on enviously at the likes of Madonna and Bananarama performing on tubes across the globe, while living in a seemingly unobtainable, exclusive world. The lows and high pressure of this lifestyle were, then, usually kept under tight wraps for fear of bad publicity. And maybe that was the attraction of becoming a popstar, not actually knowing about the harsh realities, which exist, we simply witnessed the highs from the safety of our anonymous world.

However, this theory may have recently been contested, with the enormous success of ' Bardot' who are the end result of the Popstars project'.

Many Australians have virtually lived this once in a lifetime opportunity alongside the five girls (Sally, Tiffany, Sophie, Belinda and Katie) by tuning in to the Popstars television program, weekly. Though it appears a realistic insight into a Popstars demanding lifestyle, is not deterring anybody least of all not their thousands of Fans who have already made 'Bardot's' first release Poison a No 1 hit nationally ...

Femail.com.au figured there were still some questions left unanswered, so we asked Sally Polihronas from Bardot to give us a first hand insight into the Popstar story so far.....

The television show can at times portray you guys as virtual popstar slaves, is it as tough as it looks?

Well it is emotionally tough and tiring. But it's like anything - if you want to achieve great results you have to put in the effort.

So tell us the truth, do you miss your own lifestyle?

(No hesitation) Sure! I miss my usual routine and simply going to gym can even be a problem, some days there is no time for anything besides work. It is all about adjusting. I am very family orientated, so that can be tough being away from them.

So far has the popstar experience exceeded your expectations or is it about what you expected?

With something like this I guess you never know what to expect. I knew it was going to be hard work, but I could see the long term rewards. I have been in this industry for sometime, so I guess I had realistic expectations.

Do you have a best friend in the group?

Sophie and I get along really well, we are currently sharing an apartment at the moment. I guess Sophie, Tiffany and I are the closest but we all get along. It's no different to any other situation in life, some people click more so than others. Sharing with Sophie is certainly easier than all of us living together, put it that way.

Can you think of anything people would be surprised to find out about you?

I like to listen to Anthony Robins! (laughs) I'm really into anything that makes me mind strong and positive. I'm also very religious, being Greek Orthodox I have a high standard of morals and values. Umm I love to keep fit but that wouldn't surprise anybody who knows me.

Given a choice would you prefer not to have the television following your every move?

The television program has been a great launch pad. Basically, if we don't want the cameras around, they don't film us. Having studied marketing I can appreciate what an excellent promotional concept the program is.

The New Zealand Popstar version, True Bliss (www.truebliss.co.nz) I have to ask - do you take on board what they tell you, about their rapid rise to, and fall from, fame?
It's hard to draw comparisons as their situation was so different to ours. From what I have heard, it was in no way as strategically planned they apparently come up with an album within three weeks! I'm not concerned about this being Bardot's outcome, as we have really put in the hard work - nothing has been that instant.

Do you see Bardot as a long term project in your life?

I see it for at least the next few years whether it's 10 or more I don't know. All I know is that I am so grateful to be part of a group because we do lean on one another. To this solo would be so tough.

How long are Bardot locked in for?

We have been signed for at least five albums so I guess we will reassess things after that.

What would you be doing right now if you weren't involved in Bardot?

I would be working in Marketing/PR capacity, I studied marketing and before Bardot, I was working as a promotions manager and podium dancer for the past five years for an Adelaide Nightclub.

What is your favourite Bardot track?

"Love me no more" The guys from Kaylan actually wrote this one and I love it!