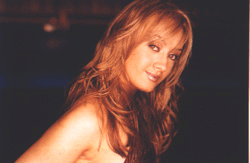 FM: Let's begin with the whirlwind success you've just experienced, how did this come to fruition?

J: Well I have been preparing for a solo career for the past two years and the opportunity to do the dance single "Jackie" came along and I accepted and took it on as a challenge. Prior to this dance hit I had been concentrating on R&B.

FM: So how did you feel about remaking Jackie, did you personally like the song?

J: Yes I liked it from the start, so I was told to take it home and work on it. I was looking forward to projecting the track the way I thought would do it justice which in my opinion was aggressively and I also took the opportunity to give a good interpretation of what my voice sounds like.

FM: Did you expect the success that Jackie received?

J: Honestly I thought it was one of those dance releases that would only get played in Clubs. So the success came as a surprise.

FM: Did you receive the support you needed from commercial radio initially?

J: At first radio was hesitant and we were told, it's just not for daytime radio. So we said OK, but then what actually happened was the song got so big in the clubs and the support from the Clubs was there. Radio was then forced to jump on the bandwagon and play it. Now it's one of the most requested songs on radio!

FM: Has this single been released O/S?

J: Only in New Zealand, it reached top 5 and my single Pack your Bag reached Top 5 as well. We will be targeting the O/S market such as the Asian and European Markets, however we want to make sure the package is complete so the O/S market can jump on it straight away. Some artists do take the approach of pushing only one single, but what's to come from you after that? I'm going to go in prepared.

FM: How does recording and performing compare to you?

J: Mmm it's on such a different level, when I'm performing live it gives me the chance to sing the way I want to, it's adrenalin driven and the more the audience give me the more I want to give. I always sing live so whether the audience like the music or not at least they can say that I sang live and that's really important to me.

FM: What would you class as your biggest performance?

J: I would class the Aria's as the most important, all your peers are there and the fact that I had received an Aria for the highest selling Australian single it was a really important performance, important for all of us, and it's a high rating show that's National.

FM: How do you overcome nerves before a performance?

J: Well I think with every performance you relax more and it can only get better. Everyone has their own way of dealing with it, myself personally I don't like to think about it, you will find be running around playing the comedian and when I'm backstage I psyche myself up and run through things in my head. Now it comes so naturally that I just get out there. When working on T.V you have to follow camera's which takes more thought and I'm also aware of the faces I'm pulling as I sing (laughs) I say to myself don't pull too many faces!

FM: Your next single is "Are you ready?" is this getting back to a more R&B sound?

J: Yes and the vocals are full on, I used to think Jackie was fast but not along side this track. "Are you ready" is powerful and up tempo it's got an everybody put your hands in the air vibe. It's hyped and aimed the age group that just want to dance and have fun(my age group). I guess that's why I have not done a serious ballad yet, even though I think people want to hear it from me and I would love to do it myself, I think I have a certain direction to stick to at the moment.

FM: What or who do you take inspiration from?

J: Well I try to take inspiration from a lot of different music even though my CD collection is mainly R&B music I like all types. I do find now that I'm older and more involved with production I am buying music more for that reason rather than just buying for the vocals.

FM: How do you enjoy spending your spare time, clubbing perhaps?

J: I like watching video's going to the movies, eating I love eating! Japanese and Italian is my favourite food, but I love Mum's cooking. As far as Clubbing goes, I still go out but I don't find it quite as enjoyable as I used to.

FM: You're over Clubbing at twenty?

J: I thinks it's because going out now is different to going out a year and a half a ago, now people are going to approach me they watch everything I do and it's more draining, I have to really be in the mood to go out, but sometimes you can find me at Carousel on Saturday nights or the Mercury lounge on a Sunday night.

FM: So on a final note Joanne what would you say to an artist that hasn't yet got to where you are and is relentlessly trying to break ground in this industry?

J: Basically my experience is all that I know and I haven't been one of those Artists that's had a hard time with knock backs. So from me the only advice I can give is that there is no right or wrong way for some artists it happen easily and for others a it's a different way. The main thing is to stay "humble" and never think that you're better than anybody else you just have to be yourself....