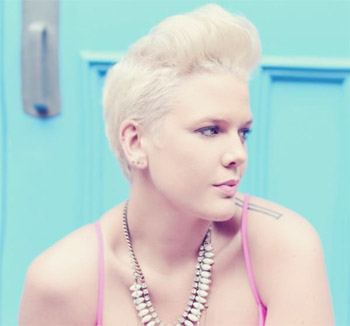 Australian singer/songwriter Betty Who has been announced as a special guest on the Australian leg of the Katy Perry Prismatic World Tour which kicks off in Perth, November 2014.

Sharing the state-of-the-art Prismatic stage, Betty Who will appear on the Australian Tour from 7th of November - 28th of November. Betty Who, born Jessica Anne Newham, moved to the United States in 2007 to attend the Interlochen Center for the Arts. Betty began playing cello at the age of four and is self-taught on piano and guitar. She wrote her first songs at age 14, and began performing as a singer-songwriter at age 16. After high school, Betty attended Berklee College of Music in Boston. During her first semester, she met producer Peter Thomas who was also attending Berklee.

Betty Who has been dubbed an "Artist to Watch in 2014" by the likes of Elle, Cosmopolitan, Time Magazine, and Spotify. Praised for her 'distinctly bright voice and arresting pop textures" (Billboard), Betty Who has been described as a mixture of 'early Madonna," 'Katy Perry and Robyn, with spunk and confidence" (NY Mag). The 'smart infectious" (Elle) songwriting on her new EP will solidify her place as 'the next great pop star" (Idolator).

Betty Who has already released two EP's, -The Movement' and 'Slow Dancing', which have both received praise across the mainstream and indie spectrums. Her breakout single, 'Somebody Loves You" was the soundtrack to a flash mob marriage proposal that went viral, receiving over 12 mill views on YouTube! You can check it out here.

For those unfamiliar with this FLAWLESS diva, you can polish up on your Betty Who knowledge starting with Part 1 of her eight-part web series 'WHO IS BETTY WHO?"!

In this episode, Betty and special guest Sophia Bush count down their top five favorite Beyoncé moves and their practical application in everyday life - Click here to watch!

Check out Betty Who's brand new video for anthem 'Somebody Loves You" now: http://smarturl.it/SomebodyLovesYouVid

Interview with Betty Who

Question: How does it feel to be announced as a special guest on the Australian leg of the Katy Perry Prismatic World Tour?

Betty Who: Yes, it's going to be insane! I am so excited because I haven't been back to Australia since I started performing. It'll be the first time in Australia, with my band which is very exciting however it feels so right that I'll be returning for the shows.


Question: That's a lot of shows, how are you preparing?

Betty Who: I am on tour right now and then I have a months' worth of rehearsals for my tour and then Katy Perry's Prismatic tour. There will be lots of time taken to rehearse new choreography and lights; we're figuring it out as we go but there is a lot of work that goes into it – more so for her but me too (laughs)!


Question: How did it all come about?

Betty Who: No one told me it was on the table until it was confirmed, my managers didn't want me to get my hopes up until it was reality; I hadn't even been told we were being considered for it. Once I was booked, my manger told me and it was crazy because for me, it had come out of nowhere, as I didn't know about it.

Betty Who: I do. I am inspired by what happens to me on a regular basis whether that's my friends or my boyfriend or even my ex-boyfriends! There is always something happening that I can write about and my songs come from real relationships, real experiences, real conflicts and real resolutions.

Betty Who: When I'm not working on my own music I'm listening to The 1975 as they're so amazing!

Betty Who: Oh! It's so different, writing and recording in the studio is very cool but I prefer live shows because of the interaction and the excitement of people every night on tour is the best thing you could be possibly be doing.

Betty Who: Everyday (laughs)! At this point in my career, it's the hardest part I've been in and I am having to work harder than I've ever had to work, in my life. Some days I think -I just want to quit' and getting through that has made me a stronger artist. I will think -this is so hard' but then reality kicks in which is a good thing, it is rational thinking.

Betty Who: My Dad had a big part in that because he was always playing music around the house and singing along, that's what I remember as a kid. My Dad listens to Sting and my Mum listens to Carol King and Jodie Mitchell which means I always listened to singer/songwriters growing up and that impacted the way I write and the artist I am today.

Betty Who: Having people question! It's hard when you're making something alone and you think it is right and you're doing the right thing then you have 40 more people come along and question your thoughts. Once I'm questioned then I begin to second guess myself, having more people on any team is a blessing and curse because it makes it harder to know if you're absolutely doing the right thing but at the end of the day you excel 40 times faster than you would have. There have been a lot of people who have sat me down and asked 'Are you sure you're doing the right thing?" and I've really had to think about that which is challenging.

Betty Who: At this moment, I'm on tour which means sleep in as late as you can with some days that being 6am and others it's 2pm; you don't get a lot of sleep, on the road. I get up, eat breakfast, get a workout in (if you can), get in the van and drive to the next place, load in your gear, grab dinner, get changed/put your face on and then play a show… then pass out because you're so tired! Repeat.

Betty Who: That's so hard because I have so many but right now my number one person would be Miguel.