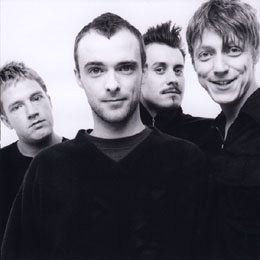 Is music coming full circle? Are audiences rejecting destructive rappers lyrics, those self indulgent, sex kittens squealing substandard lyrics; enter Mariah. Are we saying no to music with 'attitude?' Those artists continually demanding our attention rather than cleverly capturing it. No doubt teens hankering for a rebellious lyric to vent on, would disagree, but for those who have evolved, or who simply feel like a change in pace momentarily, how about this for a new angle? 'Real people', making 'real music' about 'real life' no political messages, no pretenses, just grass roots music to feed the soul. Messages about love, life and laughter. Feel yourself getting lighter? Or perhaps you're conjuring up visions of Judith Durham and the Seekers?' Well there's no need; because this 'feel good' music is being effectively channeled through the cool, adult pop sensation Travis - the latest ground breaking act to tour Australia. Currently in a market all on their own (at least for the time being), not since Bob Dillon, Simon and Garfunkle and perhaps U2 and REM's earlier releases have we heard such grounded talent.

Like the Album title "Travis The Invisible Band" suggests, Travis are sublime, it's all about the music.

Q: Neil, Travis has been together for over 10 years, how did Travis form as a band?

NP: (In a broad Glasgow accent) "By complete accident, first we were friends, then in a band secondary, which is kinda cool because we never really intended for the main thing. Just mates kickin round, so it was kinda cool. We all grew up in Glasgow, it's a small place when you know people, and we all met one way or another through art school. At the time I was working in a shoe shop."

Q: Do you think that the success/fame has changed any of you?

NP: "Not to any lesser degree, no we haven't changed in terms of jumpin 'bout in food courts, and things like that, we're still the same guys. When we go back to Glasgow, it's important to us that we remain true to ourselves and our up bringing."

Q: Is that so important, 'to remain the same' and maintain those grass roots in order to create that distinct Travis style of music?

NP: "It takes the focus away from the possibilities of becoming a celebrity which is what 'everyone' seems to be preoccupied with these days."

NP: "Suppose you could say that, it's nice you pick up on that, yeah".

Q: I detected sounds of U2, Oasis and the Verve in your music, were these bands generally a huge Travis influence?

NP: "U2 and REM are our biggest influences. Those bands have managed to stay together for so long and keep it going, which is really something for us to strive for."

Q: What or who, do you draw inspiration from?

"Inspiration doesn't always come from music, it could be smiling kids playing in the street with their families, just every day things you see, passing you by".

Q: This is your third album, do you think each album becomes easier to make?

NP: No, it demands more and more. If it become easier then I would be a little suspicious, that we may be becoming complacent.

Q: According to Dougie, when you went in to commence work on this album, at Ocean Studio's, you guys were on a high from the tour; and building the third album proved a little tougher. Dougie's quoted as saying:

"Unfortunately the last thing you need to make a record is high self esteem, the first week saw us performing egoectemy's on each other."

Q: How do you regain your focus and capture the essence of the band, after such incredible success?

"You spend a week having a nervous breakdown, and then you realise that's its not the end of the world. You have to have something to offer but you have to get down before you can get back up again. It's a natural equation that balances out; a yin and a yang."

Q: What's your favorite track, off the latest album "The Invisible Band" and why?

NP: "Probably.... "Indefinitely" cos it has that waltzy 3,4 times signature that swings, its just gentle."

Q: Several songs on 'Invisible Band' discuss living and dying, and are quite philosophical, what is your philosophy on the after life?

NP: "Well I'm not particularly religious! (laughs) To be quite frank I think we just rot away in the end."

Q: No romantic notions there!
"Well I do think there is a sense of soul or spirit, I think you leave that with people that love you, mmm... I don't think you go to any fantastic place or have any calling. While you're on this planet now you get your chance matey and that's it."

KC: Dayton and Faris made your clip for "Sing." Apparently you guys were big fans of their work, particularly the REM Tour Film from 91-92. Firstly how does it make you feel to now have Dayton and Faris working with Travis and what's the process, do they simply listen to the track, and then arrive at a film clip concept autonomously?

NP: It's fantastic working with them. If you want someone to make a video or any other piece of art which may pertain to the band. Give them the opportunity to create what they're good at, and not try and influence them in any way, because you are dealing with people who have a lot of experience. Once you get to know the creators on a personal level they see your little quirks and see what you're like and expose that.

Q: Just in contrast what was Travis doing back in 1992, while you were admiring Dayton and Faris's work on the REM tour film from afar?

NP: We were probably rehearsing with a couple of old band members, at their house in their backroom and we would meet up after work, rehearse from 6.00pm 'til 900pm then get the train back to Glasgow and get up and do it all over again. It was a very simple and easy life then.

Q: Yes, so which life do you prefer?

NP: (laughter) Good Question! Well we are very fortunate where we are sort of, but after a while you have no sense of home. So anything that involves being at home and doing nothing for a couple of days is quite enjoyable. Coming east for a change instead of going to America was a nice change, we just came from Japan and Singapore.

Q: What was your perception of Australia growing up in Scotland?

NP: (sounding perplexed) You mean.... what did I think?

Q: Yes, did you have any preconceived perceptions before you arrived on your first visit or was Kangaroos (laugh) the extent of it?

NP: Umm (sigh) yes it's a shame because I think Kangaroos is the extent of it for a lot of kids, I remember doing a school project on Marsupials.....

Q: Okay now we are going right back!

NP: Yes back to when I was like 7, I was quite inspired I had all these pictures of Australia and I was more interested in the wild life and geography to be honest.

NP: Your culture, your comedy, your cooking.

Q: What's the most satisfying part of your job?

Q: How do you enjoy spending your spare time?

Q: The stuff you grew up on, comfort food?

Q: So on a final note what would you say to an artist that hasn't yet got to where you are and is relentlessly trying to break ground in this industry?

NP: Don't be impatient, (laughs) because when it happens, trust me you'll be so busy you'll wonder why you were waiting for it!