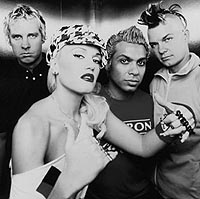 NO DOUBT has No DOUBTS

In the often fickle and tough world of music, it is extremely rare for bands to remain together these days, for a lengthy period of time. But for hugely successful band NO DOUBT, they are at home hanging out with one another, making great music and are still having one helluva party! At the heart of the quartet's fifteen-year musical journey is a style, a sound that celebrates their enduring bond with their millions of fans, worldwide. The sound that gives the pleasure of pure pop: danceable, hummable and instantly accessible songs.

In this intimate interview, FEMAIL discovers why NO DOUBT is one of the music industry's biggest success stories.

FEMAIL: You have just completed a new album, how did you find the recording process this time around?

Gwen: The energy of this record feels really like when we were first together, I think, as far as it's really upbeat. It's really fun. It's really light-hearted. The funny thing is, is that a lot of people that we've looked up to and idolized growing up, are people that we've either got to meet or work with in some way. On this record, we worked with loads of those people. And I think we felt really, really lucky to be able to have that. So inspiring. It makes us feel like we just got to experience so much being in a group.

FEMAIL: Gwen, are many of the songs off the album based around real-life experiences you've had?

Gwen: Most of the songs are based on my experiences, for sure. I mean all of them pretty much are. And I think the one thing that we did do different this time, or I did different, was I tried to be a little bit more spontaneous. I wanted to write stuff that was really every day. And I wanted to just take little snapshots of just things that had gone on. And I didn't want to labor over it.

FEMAIL: You have been together as a band for quite a number of years. Are you still all having a good time?

Tony: We're going on our fifteenth year together, which is quite a long time actually for a band, you know? And for us to be getting along so well and still be having fun doing what we do is pretty amazing. We're really, really happy.

FEMAIL: Musically, who has influenced you?
Tom: We've always been really interested in all kinds of different forms of pop music, whether it be like, say, dance hall, or you know, stuff back from the Beatles, to stuff like Dr. Dre and hip hop and we're kind of like cultural sponges in a way. I think those influences have always kind of been in our music.

FEMAIL: Tell us a little about your latest single "Hey Baby".

Tony: The first single off our new record is called "Hey Baby." And lyrically it's about Gwen's observations of the stuff that goes on back stage every night after our shows, you know kind of the hijinks that the guys in the band get in to.

Tom: Dave Meyers directed it - we wanted to keep it very lighthearted and fun. And that's what the video is. It kind of captures a night in the life of NO DOUBT. You see us on the tour bus, kind of up to our...

FEMAIL: How does it feel being on tour with U2? Are you great fans of their music?

Tony: The U2 tour is a dream come true. I mean we've been huge fans our whole lives, but we're very honored and humbled to be opening for them. We did our first show with them last Thursday at Madison Square Garden in New York and it was surreal to, you know, to be opening for them. It was our first show this year as well. And to be stepping on stage with U2 at Madison Square Garden was amazing. And then we got to watch them that night. So that's another like, perk, to this whole tour. Not only do we get to open for them; we get to watch them every night. And I think they're at their pinnacle and their peak, just amazing right now. So, we've got nine more shows with them. And looking forward to them.

FEMAIL: Are there any other exciting events happening for you guys in the coming months?

Gwen: The next really exciting thing is that Adrian is going to be a daddy in February. So we're really looking forward to that. And then we'll probably start planning the tour after that. Hopefully we're going to have the baby with us on tour, so it's going to be a whole new experience with touring with diapers and things like that.

Man: After the baby comes, we're going to do a tour of the states and we plan to go around the world with "Rock Steady" as much as we can.

FEMAIL: While on the subject, why "Rock Steady" as the title for the new album?

Gwen: It's actually the name of the type of music in Jamaica, but it kind of, I think the line is actually based off of a song that we wrote called "Rock Steady." And it's the end track to the record and it's about, you know, a real love survives, a rock steady vibe. You know it kind of sums up our friendship. It kind of sums up the record. It sums up some first real things for me and it's just about really writing the record.