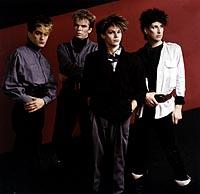 I'm sitting at the Wallflower café today in South Melbourne waiting for 'Brian Canham' front man for eighties band Pseudo Echo. Mmm who would have thought I would be interviewing Brian 15 years after seeing him in concert with Uncanny X-men at Festival Hall at the tender age of 14. Yeah right 'Tender age of 14' in the eighties there was no such thing. The night of that concert was dog eat dog, literally, I recall being caught up in the crowd and slammed into the front of the stage from behind by thousands of ruthless female teenagers sporting cobalt blue eye makeup and weave perms determined to achieve pole perv position. My best friend and I were not deterred though and remained at the front of that stage and stood firm that nobody was moving us!

The crowd got 'pushier' and louder as Pseudo Echo took their places and started that familiar electronic beat. The song? I can't remember it was fifteen years ago however the atmosphere and desperation from the crowd to be as close as possible to these guys I do remember!

Back to reality and the nineties..... here comes Brian now he has a conservative haircut! No makeup and is in great shape. Two very attractive young ladies are by his side, not the type that would have been hanging off him in the eighties though these girls call Brian 'Dad'!

FM: Where did you grow up 'Brian'?

BC: Northern suburbs of Melbourne

FM: What was your first job?

BC: A Cabinet maker, but I also assembled skate boards I enjoyed that more.

FM: What was your favourite Club in the eighties?
BC: Favourite Nightclub, Inflation on Kings Street.

FM: How did Pseudo Echo originally meet each other?

BC: We all went to the same school it all started there.

FM: What was the music that inspired Pseudo echo?

BC: Simple minds, Ultravox, Japan and then later Durran Durran and Human League. I didn't realize how much we were influenced until now. It's quite obvious when I actually listen to our music and draw comparisons.

FM: The name Pseudo Echo, how did you come up with it?

BC: It comes from a user manual to a classic analogue keyboard that we sometimes use, Pseudo Echo is the name of an 'example sound'.

BC: Love and Adventure

FM: The band first formed in 1982, where was your first gig in Melbourne?

BC: Pierre knows all these stats he has the photographic memory, though I think it would have been either the Jump Club or Maceys.

BC: Macey's is now the Saloon Bar in South Yarra and The Jump club is now called The Club in Collingwood.

FM: "Right, now I'm with you", the Club caters for pretty obscure bands now, was this the case back then?

BC: It's always been alternative, but it was a breeding ground for a lot of well known Australian acts today like Kate Cebrano.

Back then Pseudo Echo were alternative we were very much a city based, band. Venturing out to the suburbs was a scary experience guys would be throwing things at us. It was really fortunate that their girlfriends liked us and they would be dancing which would divert the guys attention away form us. In a lot of cases we were paired up with the wrong acts like 'Swanny' and their audience wasn't appropriate.

The underage gigs (bluelights) were fine but the pub scene was not! I mean we wore makeup, had teased hair and were pretty dressed up compared to bands in Australia at the time. Overseas we would not have been out of place at all.

FM: Do you think it's any easier for Aussie bands these days to break ground in this industry compared to the 1980's.

BC: It's so different today, in the eighties you were always on TV in magazines it was the era of the popstar it was more proverbial in the eighties. These days it's the anti hero they will play it down and say we're not doing that, it's a rebellion. The egomania in the eighties was unbelievable everyone wanted to be a popstar, most of my friends at some stage were popstars it only took a performance on Countdown and you were guaranteed major exposure.

FM: Tell me about Countdown, what was it like to perform on the show?

BC: It was such a scene back then (looking reminiscent) and it was a big achievement to get on to Countdown. If you had a new single out and they played your clip, you knew the record sales were going to sky rocket. Countdown gave you a fair go and unless you had an ordinary song you were pretty much an overnight success.

FM: Why is Pseudo Echo making a comeback now?

BC: Pseudo Echo is a creative outlet for all of us, we went off and tried different things which have been reasonably successful, I enjoy producing and intend to keep doing that. Going our separate ways at the time was right.

It was only when I was propositioned several times to do a comeback gig, that was only meant to be a one off and it did not occur to us to fully comeback until the first comeback gig at the Retro Club in Sydney on NYE in 1997 the response was so overwhelming that a comeback made sense!

Reforming wasn't always inevitable I didn't particularly enjoy the last line up we had and an alternate line up did not occur to me until recently. So Pierre and I decided on Darren Danielson (Chocolate starfish) and that is the nucleus of Pseudo Echo and Ben Grayson completes Pseudo Echo today.

FM: What demographic is your audience today?

BC: It's a pretty good mixture, we found when we first started there were a lot of teenagers from the eighties in their early to late twenties now. There are also a lot of people in their early to mid thirties that were twenty something when we popular. We have also established a younger following so It does range from eighteen to mid thirty year olds.

FM: Have you got a Melbourne gig at the moment?

BC: We play regularly at the Mercury Lounge

FM: Pseudo Echo are an obvious choice for the up and coming 80's revival concert featuring Culture Club, Village People in Feb 2000 at the Sports and Entertainment centre, but how did Pseudo Echo's involvement come about?

BC: It was an idea that was supposed to go ahead quite a while ago and then I didn't hear much about it. But recently I heard it was happening and we got the offer to play I thought great I mean we don't want to be stuck in the past but we don't want to deny our roots we're proud of them. I see this concert as a great opportunity to gain.

FM: Your biggest hit was undoubtedly Funky Town, what first inspired you to re release this track, first time around?

BC: It was getting played in the clubs when I was a teenager and I liked it, the band was at a point at a point in their career where we had to keep pulling out something fresh and we had already achieved about half a dozen hits and were between albums 2 and 3, we were not quite ready for album three and had just done some International touring. A friend of mine reminded me of Funky town he brought the vinyl out one night and I started thinking of ways I could produce it and improve on it.

FM: Funky town is also your comeback single (which sounds great with the 90's Dj modifications) is this because it was so huge the first time around (13 weeks in Australia at no1)?

BC: It was Groove Nations idea (new label) to do the remixes they thought it would be a good starting point as people can identify Funky Town with Pseudo Echo 'instant brand awareness'. This version of Funky town has of course been remixed to cater for today's sound. There are several guest D.J's involved including Tony C (Mr Quick), Sly he did the funky lounge mix and Quench also features.

FM: What's the next original single due out and is there an album on the agenda?

BC: The next single is called 'Hope I go to heaven' and 'Teleporter' is the name of Pseudo Echo's new album.

FM: Well it sounds as though Pseudo Echo coming back in a big way, good luck with the re-release of 'Funky Town' and I look forward to seeing you guys back in the charts again and on Video hits rather than Countdown!