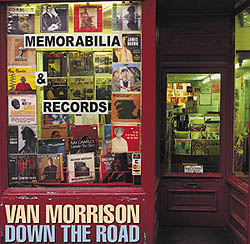 In fact, if you look hard you'll find hundreds of stories about George Ivan Morrison, just as many anecdotes - he once organised and funded a conference at which one of the sessions was titled "The Effect of Music Upon Hormonal Secretions in the Endocrine Gland" - and a smattering of face-to-face moments.

An only child, born into a working class Protestant community in East Belfast on August 31, 1945, he first experienced rapture when he was three years old, crouched in front of an old gramophone listening to a recording of the great American gospel singer Mahalia Jackson. Eight years later he experienced rapture again while walking along Cyprus Avenue. His father bought him a guitar and he learned the chords from a songbook of American country songs. Soon afterwards, Van formed a neighborhood band called 'Midnight Special', which featured a boy playing a lead pipe that he had found in the Beechie River, and then he formed the Sputniks, which included a washboard player and a boy who played a broom handle attached to a tea chest.

When he was 15, Van got serious, formed 'The Monarchs' and set out to make his living playing music. 'The Monarchs' tried their luck in Scotland, then London, and finally Germany, playing six-sets-a-night in the red light districts of Hamburg and other cities. Finally, he joined a band called 'The Gamblers' who in 1963 evolved into 'Them', and that was that. Music would never be the same again. Everybody would experience the gutteral howl he had been honing. And that soulful, heartworn caress which bleeds pure emotion and evokes the rawest of passions. 'Them' were R&B rock at some insanely gut and primal level. Their second single was a vicious cover of Big Joe Williams' 'Baby Please Don't Go' but it was the b-side that would rewrite rock history. 'Gloria' was the first great Van Morrison song, a riotous piece of garage music that has become a staple for beat combos, big hair bands, punks, spunks, glitters, anybody who wants to kick out the jams. 'The Doors' covered it, Patti Smith covered it, the Shadows Of Night covered it. 'Gloria' is a story in its own right.

The Bert Berns-penned 'Here Comes The Night' (1965) was an extraordinary follow-up. A mesmerising psychedelic nugget. So it began. His first solo single, 'Brown Eyed Girl' is one of the greatest songs of all-time and often makes the various top 30 'best ever' song lists that regularly appear. His debut album 'Blowin' Your Mind' was okay; his second album, the jazzy folk-laced 'Astral Weeks', remains one of the 10 greatest albums ever made, although you'll find
plenty of arguments over whether it or 'Moondance' or 'Tupelo Honey' or 'Saint Dominic's Preview' or even the brilliant live set, 'It's Too Late To Stop Now', is the pinnacle of the Man.

Elvis Costello, a generation and a bit later and just as talented, says 'Astral Weeks' is "still the most adventurous record made in the rock medium, and there hasn't really been a record with that amount of daring made since." Personally, I'll take it or his extraordinary collaboration with The Chieftains, Irish Heartbeat, as the yardsticks. That said, 'Down the Road' is a lovely, bluesy, country-tinged, addition to the work in progress.

And like a rare wine, or more accurately, an old vinyl album, 'Down the Road', comes with sleeve notes - by the noted musician Ben Sidran. In part, he writes, "There are not many roads. There is only one road, infinitely connected, like the grooves on an old record, endlessly leading away from home and back towards home at the same time. It's all one long journey and travelling is just what we do to stay alive."

"From the beginning, the seeker, the entertainer, the wanderer, bringing the news into town and then moving on down the road - the gypsy caravan - has vaunted Van's songs. His road leads up into the mountains, where the cool breeze make the squalor down below a distant memory, and it leads back to New Orleans, to Chicago, to the fertile crescent, the
heart of the matter, to the home of the blues. "

"The blues is the mother road story. Every road story is different and yet the same. 'Saw a bus coming,' Van sings, 'and I had to get on it; still trying to find my way back.' What he calls 'the lonesome Homesick Jones' is where the blues begins and ends ...

And like all roads there are stories. This is one of the best. From Paul Du Noyer's interview in a 1997 edition of Q, a simple tale: "A musician who once played in his band recalls an all night barstool debate with the great man. Morrison argued his case, an obscure philosophical point
of some sort, with rising force and passion. Worn down and weary, the musician finally conceded defeat.

Some stuff about Van you might not know then, extracted from Van, by Brian Doyle, the editor of Portland Magazine at the University of Portland, and published in the Summer 2001 issue of The American Scholar.

"Perhaps he is a legend largely because he does not wish to be. He appears offstage exactly one minute before he is due onstage. He leaves the theatre 10 minutes after the encore. He is a sucker for chocolate ice cream. He once told an interviewer that he eats nine full meals a day. He told another interviewer that he has never in forty years performed a song the same way twice. He may or may not be married to Michelle Rocca, who was once Miss Ireland. He always sits with his back against the wall. He will eat a sandwich only if the crusts are neatly deleted. He once found an interview so onerous that he ran off down the street trying to elude his questioner, who ran after him, and who later retaliated by writing that Van had 'the belly of a baker and skin the color of boiled cabbage.'

To the author of a book about him he sent a letter listing its thirty-six mistakes. He and Paddy Moloney of the Chieftains once plotted out a whole album while walking through St. Stephen's Green in Dublin. He has received an honorary doctorate of letters from the University of Ulster. He has received an Order of the British Empire from the Queen of England. He has expressed interest in teaching philosophy at Belfast University. He is fond of leaving the stage while shouting Soul! Soul! Soul! He has said that 'sometimes I feel like Phil Spector and sometimes I feel like Howard Hughes.'

He once stopped in the middle of a concert in Holland and suddenly recited the Lord's Prayer. In recent performances indoors, he has asked that the theatre blaze with light. He has sung with Richard Gere and Kermit the Frog. His songs have appeared in films directed by Martin Scorsese, Wim Wenders, Francis Ford Coppola, and David Lynch. He recorded a version of Cú Chulainn's saga for a cassette issued by a company called Moles of Bath. He has for some years now lived on the Salisbury Plain in England, between the Severn and Stour rivers, in what was in King Arthur's time called the Vale of Avalon. He has said that his favourite single concert was for a handful of people on a winter night in the Church of Saint Stogumber in the Vale of Avalon - a free concert arranged by the local schoolteacher.

His favorite television show is Fawlty Towers. The Irish poet Paul Durcan has called him the greatest Irish poet since Patrick Kavanagh. Van's song, 'Days Like This', became the unofficial anthem of the Northern Irish peace process in the late 1990s." Fascinating and peripatetic, Van deserves the last say. This is what he told the Sunday World a couple of years ago: "With me what you see is what you get. What you hear is what you get actually. And what you see on a gig is what you get. There's no more. There's nothing else. There isn't anything more to it because I'm not interesting, quote unquote. I just do what I do."