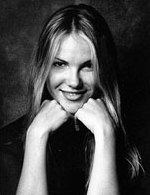 Recently signed by Universal, Anita Spring is ready! For what, you might ask? Recognition, of course, for her unique, rare to find these days 'real vocal talent', Yeah yeah, you've heard it all before, but usually about somebody that wouldn't dare attempt a note out of the cheating confines of the studio. I can vouch for Anita's talent personally and it's not as if Universal signs just anybody you know. This girl got star quality and is so close to the silver lining it literally bounces off her. It's great to see genuine Aussie talent being given a go at home, so many before Anita had to realise their dreams on foreign shores Kylie did it, Danny tried too. (good to see another example of real talent prevailing!)

So why do you want to read about another rising star? Perhaps it's because you can be personally let in on all the fly on the wall and behind the scenes stuff that goes with it, much more interesting than reading another talent discovery article right? Anita was asked by the mind bogglingly talented Powderfinger to appear live on stage at the ARIA Awards and was immediately spotted by a Universal talent scout in the audience.

The launch of her own personalised website has added a unique and enthralling dimension to her, whereby the masses can track her every move on her journey to stardom; keeping in touch with Anita has been extremely busy lately, with a cameo role in Daniel Nettheims new movie 'Angst', and on September the 1st Femail.com.au had the privilege of having Anita sing at the First Birthday Celebration. Big Yellow Taxi, No Romeo, Natural Woman were the songs she chose to sing at Heat's Cocktail Lounge, Crown Casino, and her strong sweet voice was a treat for all the many ears in the room. Thanks Anita, you're a star! No doubt Anita has many more dazzling performances in the pipeline as she pours her all into perfecting the art of being a songstress, (and a fantastic one she already is!!) By visiting her website, and reading her daily diary submissions and find out about her everyday triumphs and challenges as she lives out her dream of delivering her songs to the world. Show Anita your support by visiting www.anitaspring.com, as she invites you on her personal journey, in discovering the reality behind the surreal world of a contemporary artist.

Anitaspring.com as she is now becoming increasingly known, dropped in for a chat at femail.com.au and to let us in, on how her childhood dream is fast becoming a reality.

F: So Anita were did your musical career start out?

A: Well my Mum is a singer and my Dad is a bass player, so I had no choice! she laughs, "I never wanted to do anything else anyway. I had my first singing performance at the age of 2 singing with my Mum's 13 thirteen-piece big band with 'Five Little Ducks', and then I went to talent school at the age of five and then onto Newtown Performing Arts High School. The next major event was when I got into the musical 'Elvis' in Sydney at the age of 16, which was so much fun and opened my eyes to a lot of things! At the same time I was working at Australia's Wonderland at weekends, hosting a kids show and singing with Fred Flintstone and Barney Rubble - which is really embarrassing!

F: What was the next step up the ladder from here?

A: I in another musical called Bad Boy Johnny, which involved a lot of big names such as Christine Anu. And I ended up touring with Christine doing back-up vocals. I have also done backup vocals for artists such as Vanessa Amorosi, Tina Arena and of course Powderfinger (where she was spotted by Universal talent scout).

F: What the masses want to know, is how do opportunities such as being a backup singer for Vanessa Amorosi and Powderfinger come about? Do you approach them or vice versa?

A: I don't know to be honest...things just keep falling into place. Opportunities present themselves and you take them. If you are good at what you do the more people take notice and the more people's numbers you get. Apparently I'm the queen of networking! People see me I action and just go "Jeez...look at her go!" I'm like this big social butterfly, which definitely helps. Also Andrew my manager is fantastic. I couldn't have asked for anyone better than him. He is also a lawyer by trade, which is great especially when it comes to signing contracts!
Since the night I was approached by Universal it has been a total fairy tale, I mean I didn't even have to send out demo tapes or anything! It's great because for about 3 years I was in dire straits, and had dodgy contracts coming at me all over the place.

F: When did you decide you wanted to embark on a solo career?

A: I had always wanted to be a solo artist, but I only really started writing my own music at the age of 21. I wrote a lot of really bad songs, she admits, but in the last few years they have improved considerably.

A: Mmmmm..I do find it a challenge, but being able to have something finished on CD that I have composed myself will be amazing.

F: What can we expect for the songs on your first album?

A: Basically the songs will be all about my experiences. I have recently written one about running over my ex-boyfriend with a car and breaking his leg.

F: Did that really happen!?

A: No, she cracks up. The song is about 'You bastard' it's really funny and shows a lot of personality. There's a line ' So I heard you went away to join a cult in Texas'. It's all bull however. I just want my music to be fun and show attitude. Anyone who knows me knows that I am nuts!

F: So what have you been up to in recent times? How is the album shaping up?

A: I have been writing with a guy called Clive Young, who is amazing. I have also recently got together with the boys from Taxiride. I sat down with them and wrote 2 great songs for my album - it's totally exciting! Hopefully I will be recording the album in December and have the first single out by February.

F: I hear you also have a couple of exciting rendezvous' in the wings?

A: (Laughs) Yeah a competition has been set up through www.friend.com.au (a lonely hearts website), for someone to go on a date with me! It's like win chance to have a romantic dinner with Australia's new up and coming singer Anita Spring. I'm really looking forward to it; it'll be a lot of fun. The other thing is a big New Years Eve bash that is taking place in Sydney. I'll be performing alongside the likes of Killing Heidi, Madison Avenue and Bachelor Girl. It's gonna be one huge party.

A: Don't worry I'll be choosing my man for the evening. The other exciting project, mind you its all hush hush at this stage, is an American film that is in the pipelines.

Well it looks like Anita's career is truly set for super stardom. She already has a foundation of impressive accolades, and from what has been disclosed here there will be many more to come. She has a spring (hee hee) in her step, and is about to take off.........

To keep up to date with the daily rollercoaster of Anita's ride to success visit www.anitaspring.com , read her diary entries, view her photo gallery and a whole lot more.