Sing Along with Rolf Harris 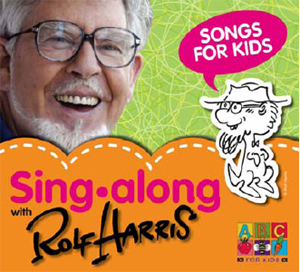 Rolf is an important cultural icon for generations of Australians, who've adored his distinctive music, entertaining persona and incomparable talent as a performer.

Over his long and illustrious career, he's entertained everyone from toddlers to centenarians with his warm,wonderful music, his talents on the wobble board and his remarkable ability with a paintbrush. Now, thanks to an exciting new CD from ABC for Kids, 'Sing- along with Rolf Harris: Songs for Kids', a whole new generation of Aussie kids can enjoy Rolf Harris's very special brand of music.

'Sing-along with Rolf Harris: Songs for Kids' is a bumper collection of Rolf's most-requested favourites put together especially for twenty-first century youngsters.

"So many grown-ups remember singing these songs when they were kids, so we decided to produce an album chock-a-block with great songs for kids," Rolf said.

Sing-along with Rolf Harris features old favourites like 'Jake the Peg', 'Tie Me Kangaroo Down, Sport', 'Six White Boomers', 'Sun Arise' and 'Two Little Boys', together with a swag of other wonderful songs that children of any age will simply adore.

"Kids love singing these songs, and we've produced fresh new versions of them. We even got The Wiggles singing on 'Tie Me Kangaroo Down, Sport', which was a lot of fun," Rolf said.

On top of these, Rolf's put his own mark on some classic cartoon songs for Sing-along with Rolf Harris, like 'Little April Showers', 'I Wanna be Like You', 'Zip-a-Dee-Doo-Dah', 'Who's Afraid of the Big Bad Wolf?' and 'Heigh Ho, Whistle While You Work'.

And there are some dinki-di Aussie tracks as well, including Rolf's own composition 'Pavlova' and 'Along the Road to Gundagai'.

Other songs featured on Sing-along with Rolf Harris include 'When You Wish Upon a Star', 'Never Smile at a Crocodile' and 'Wild Thing' - all performed with an array of unusual sound effects and instruments and Rolf's irrepressible sense of humour.

Much of the magic of this album lies in the fact that parents and grandparents will relate to it just as much as the kids. It's a great way to transcend those generational boundaries, and to join in a huge family singalong, creating bonds and memories that will last a lifetime.