Keeping An Eye On London The nay sayers said it would never get off the ground, but the London Eye has become one of the worlds top tourist attractions.


Sitting in the back of a black cab, Im trying not to look at the meter as we head from Heathrow into London - a quick currency conversion puts the damage already at just over one hundred dollars and theres still a way to go.

I try to take my mind off the luminescent red number that keeps ticking ever higher with a bit of conversation with the driver whos obviously from the East End, or sounds like it at least.

It had been five years since I was in London, having spent 10 years there as an expat-local, so I ask the 'geezer' about any changes.

After a 10 minute rant about politics (London cab drivers favourite topic after football), he tells us hes actually doing quite okay himself and its mostly thanks to what he calls 'The Wheel'.

"Its not just the foreign tourists who are crawling all over it, neither - Im doing jobs from the domestic airports as well and they all want to go there," he says. "Cant get enough of it, and its good for business - its brilliant."

The cabbies may be cashing in, but it wasnt that long ago that town planners and architects labelled it as "rubbish" and an "eyesore".

Its proper name is the London Eye, and throughout the 1990s debate raged in London about the appropriateness, and tastefulness, of the whole concept which was originally called the Millennium Wheel.

At one stage, part of it even crashed into the Thames River - during construction in 1999 which meant it failed to open at the turn of the millennium as planned.

At the time, the many critics who adopted the "told-you-so" attitude predicted the London Eye would become a giant white elephant. They couldnt have foreseen its future success.

Five years after it finally cranked into action, its attracting three and a half million visitors a year and has won 40 tourism awards - and more surprisingly its won the hearts of cynical Londoners.

At 135 metres, it dominates the cityscape from the South Bank of the Thames River and its now being compared to the Eiffel Tower in Paris and the Statue of Liberty in New York as a world renowned landmark. 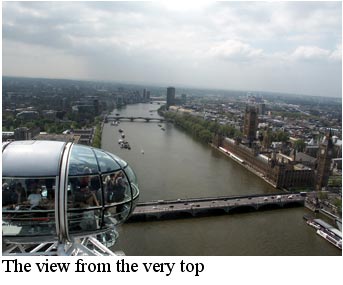 With just two days to visit the city where Id 'grown up', my plans were to hit the ground running and take in as much of the London Id actually missed out on when I was a local.

For the first time I was seeing the city in a totally fresh light - not as a jaded 12-hour a day worker bee, but as a 'tourist'.

And on the advice of Clive the cabbie and other Londoners I made the London Eye the first stop of a go-hard itinerary to become oriented with its sightseeing delights.

The London Eyes panoramic command of the city offers a totally different perspective on the British capital.

Instead of emerging periodically from the Underground system and seeing London as separate jigsaw pieces removed from each other, this is the way you get the whole puzzle.

Its a 360 degree introduction, or reintroduction, to the city and despite its grand scale it does confirm that most of London can be walked without missing too many of the postcard destinations.

The actual price of the 'flight' - as its called - is a little off-putting at 12.50(Great Britain Pounds) or $AU30 each for just the one rotation and Im a little sceptical after parting with my cash.

Theres also a proliferation of kitschy souvenir stands which have sprung up in the shadow of the London Eye, and it increases the faint feeling that Ive been suckered.

The queue is long, but attendants keep it moving at a regular pace - the Eye itself moves at just under 2 km/h and only stops for disabled access so on this day it only takes a couple of minutes before Im stepping inside the glass and steel capsule.

Each of the 32 capsules holds up to 25 people, but the attendants seem to be ushering about half that number in which means there is plenty of room inside.

As the capsule lifts slowly away from the entry platform, the sheer scale of the engineering audacity of the Eye becomes evident.

It does look like a giant ferris wheel, except that capsules are fully enclosed and is supported by a massive steel frame on one side only.

The 80 'spokes' of the London Eye use a total of six kilometres of cable and theres more than 1700 tonnes of steel in the structure. 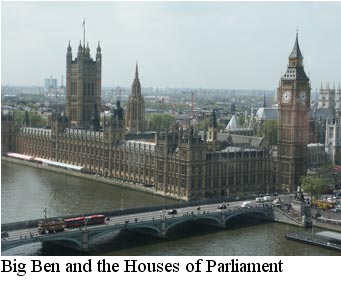 As we rise above the Thames River the first view takes in the eastern end of London including St Paul's Cathedral, the Tower of London, Tower Bridge, London Bridge, the City or financial district and Canary Wharf.

At the top of the 135 metre arc, the view becomes a 360 degree panorama and on a clear day (a rarity in London) its reportedly possible to see for 40km as far as Windsor Castle.

On the downward arc the Houses of Parliament and Big Ben take centre stage, along with the West End theatre district, Buckingham Palace, The Oval Cricket Ground, The Imperial War Museum, the Tate Gallery and Lambeth Palace.

The Eye made it all seem much more accessible than I previously imagined and it made me realise how little of the city I had actually seen, despite nearly a decade of residence.

Believe it or not, there are born-and-bred Londoners whove never been anywhere near Buckingham Palace, never mind the Tate Gallery, yet each year millions of people from around the world crawl over the British capital.

They head there for the sheer grandeur of a city that symbolises the might and power of a bygone era, where every few blocks yield yet another world famous landmark accompanied by yet another must-do photo opportunity.

After the 30 minute ride, I step off onto the platform at ground level with a greater appreciation of what London has to offer - determined to make up for lost time and “do” as many of the tourist spots as physically possible inside 48 hours.

SEVEN THINGS YOU MIGHT NOT KNOW ABOUT THE LONDON EYE