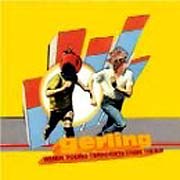 
Ever since their indie rock beginnings, Sydney-based trio Gerling have built their reputation on being slightly askew and always thinking outside the square.

For most acts that could mean the kiss of death. But when it comes to Gerling - Australia's most progressive yet accessible band - it's impossible to regard those qualities as anything but complimentary.

With the 1999 album Children of Telepathic Experiences, the young backpack-wearing Sydney group proved on disc what its live shows had been harking at for ages - that frenetic guitar energy and a punk ethos could comfortably straddle the electronic domain, too.

Now, with new album When Young Terrorists Chase The Sun, those who heralded the band back then as prodigiously talented crossover futurists are vindicated. For where Gerling's last album was the dawning of a new rock-tech fusion, Terrorists is the trio's determined step into adulthood.

"This album's been a very gradual process," explains Gerling member Presser, adding with a laugh, "Especially considering that the last one only took five days!"

In fact, sessions for the Terrorists album started over two years ago. Original recordings were with Steve Foster (favourite studio player of the Australian post-rock set), then famed remixer/dance artist Josh Abrahams and lauded, award-winning producer Magoo were both enlisted to the project too.

Over the course of this two-year journey the members of Gerling taught themselves to use computer-based technology, whilst simultaneously writing and recording the new album in their own G-House Studio. The boys say that this process of self-education contributed significantly to the leaps-and-bounds growth of the current record over the last.

"It's more concise than our stuff in the past, " says Darren Cross. "A lot more work's been put into the individual songs, as well as a lot more effort at making the album work as a whole."

And work it does. From the anthemic feelgood summer hit The Deer In You to the old-school hip-hop expedition of Brother Keith On Destructor Mountain; from the luminous Windmills And Birdbaths to the string-enhanced Fight Revolution Team, myriad styles are brought together for a seamless finish.

And, of course, there's the track everyone's talking about. Titled G-House Project, and described by the band as "a Gerling house song", it is perfectly finished with vocals by none less than Kylie Minogue.

So how best to sum up When Young Terrorists Chase The Sun? Well, it's a housey, 70s disco, hip-hop, ambient, edgy, melodic, downbeat, upbeat, stripped down, embellished up, punk rock, electro crossover album which travels faultlessly from beginning to end and has enough standout tracks to keep the singles chart happy for a couple of years to come.

And the short version of all that? Well, seldom has a band so confidently attempted such a unique melting pot. And never have the results been as blisteringly exceptional as on Gerling's new album.

TRACK-BY-TRACK
with Darren and Presser from Gerling
PHAZER KIDS IN THE WINDY CITY
Electro sounds and sampling are merged with two different drum styles, as well as a fair smattering of live sounds. "It's a little story, our little movie, the introduction to the album."

DUST ME SELECTA
"A lot of people are freaking out about this one, saying: Is that Gerling? We've really gone for it with this song. We tried to do something similar with Enter Space Capsule [from the last album] but we only had two days to do that." This track takes its influence from Daft Punk, Basement Jaxx and their ilk, and features shining vocalist Inga Liljestrom. Released as a single mid-2001.

HIGH JACKERS MANUAL
"Burke and I did that in about two days," says Darren. "That was one of the last songs that we did. It came together really quickly."

G-HOUSE PROJECT
"We met up with Kylie in this pub and the next day she was in the studio with us, singing on it. She had the flu and we were writing out the lyrics for it while we were waiting for her. Magoo did some good stuff with her vocal - the filtered stuff sounds really crazy at the beginning. This one's like a Gerling house song combined with traditional disco sounds like the clav and the guitar."

FIGHT REVOLUTION TEAM
This one was recorded with Steve Foster then reworked with Josh Abrahams. Features strings by Sydney quartet Fourplay, and vocals by Fourplay member Lara Goodrich as well as Josh Abrahams. "The lyrical content is a love song for the E generation."

BROTHER KEITH ON DESTRUCTOR MOUNTAIN (4001)
"One of our heroes is Kool Keith [LA modern hip-hop legend] and when we were recording this song we heard he was interested in working with other people. So we sent the song to him and when we eventually got it back it was two minutes of him talking mumbo-jumbo - freestyling and stuff. So we spent two days cutting and pasting all his words and making phrases up, 'cause it sounded like he's had a bucket bong and then went and did the track! It's an old school hip-hop track, really downbeat."

DEKA
Previously released as a giveaway promo single only available at live shows. "This was originally just an ambient, fast-break kind of song. We added the vocals at the last minute and it sounded really good, more aggressive. It's like a lo-fi Prodigy song or something."

HOT COMPUTER
"We wanted a f#$ked-up slow house song that was just crazy. This song captures our humour, I think. It's probably the funniest Gerling song, it's really camp, it makes us laugh heaps. It's about internet pornography and the evils it'll do to people."

SERPENTHEADZ
Another cruisey song on the record, this one was recorded early in the album sessions. "It's our take on the whole Super Discount [French house] type of stuff. The song's just about dancing at a club, having a good time."

THE DEER IN YOU
The album's first single, released late-2000, recorded with Josh Abrahams. "This is our anti-capitalist song, but it's not political. We tend to look at all the anti-capitalist [culture jamming, No Logo] stuff more on an entertainment level. It's a cheeky song about revolution - big brother and the man, all the usual 60s stuff."

WE DESIGN THE FUTURE
"We were playing this song about two years ago and it was called Sex In High School. It was originally really Mogwai-ish, but then we changed it into this ambient track. It really ends the album well. We did this one with Steve Foster, too."