Gwyneth Kate Paltrow (born September 27, 1972) is an American actress, singer, and food writer. Following early notice for her work in films such as Seven (1995), Emma (1996), Sliding Doors (1998) and A Perfect Murder (1998), Paltrow rose to worldwide recognition for her performance in Shakespeare in Love (1998), winning the Academy Award and the Golden Globe Award for Best Actress.

Her other film credits include The Talented Mr. Ripley (1999), The Royal Tenenbaums (2001), Shallow Hal (2001), Proof (2005), for which she earned a Golden Globe nomination, and Two Lovers (2008). She won a Primetime Emmy Award for Outstanding Guest Actress in a Comedy Series in 2011 for her five-episode role as Holly Holliday on the Fox television series Glee.

Paltrow has been the face of Estée Lauder's Pleasures perfume since 2005. She is also the face of American fashion brand Coach, owner of a lifestyle company, Goop, and author of two cookbooks. 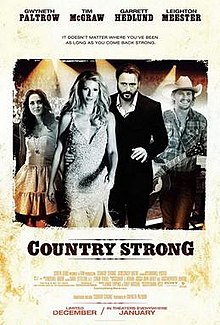 Country Strong (originally titled Love Don’t Let Me Down) is a 2010 drama film starring Gwyneth Paltrow, Tim McGraw, Garrett Hedlund, and Leighton Meester. The film, about an emotionally unstable country music star who attempts to resurrect her career, was directed and written by American filmmaker Shana Feste. It premiered in Nashville, Tennessee on November 8, 2010, and had a wide release in the United States on January 7, 2011. This is the second film in which McGraw and Hedlund have worked together, the first being Friday Night Lights in 2004.