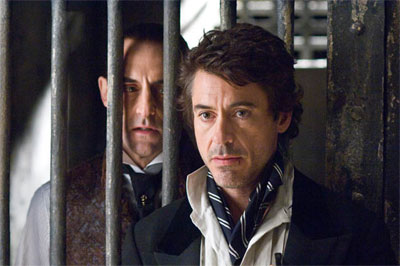 It's been quite the time for Robert Downey Jnr whose career, just a few short yearts ago, seemed to be on the decline. But then Iron Man changed all of that and the Oscar nominated actor is back on top. This Xmas audiences will see Downey's original take on the classic detective Sherlock Holmes and next summer, he returns as Iron Man in the much anticipated sequel. At the annual Comic Con, Downey ws in attendance for both films and spoke to Paul Fischer.

Robert can you talk about your take on Sherlock Holmes that one assumes puritans will find problematic?

Robert Downey Jnr: My take is what the puritans would expect, if the puritans know what I'm talking about that is. Several of the most surprising things right off the bat are that off associated props have never appeared in the novels or the short stories, he never wore a cap except maybe once for a minute, but even then it was described differently, and even the long pipe was just something that William Gillette used to not obscure his face on stage so the very thing that the kind of, somebody smarter than me will know this, what do you call something when they call something out of black paper? Silhouette -- even those things aren't really quite accurate so we just went back as much as we could without wanting to be reverent beyond repair to help Doyle explain the characters.


You have a great way of making all of the characters feel very natural. Is that easy to bring to this period in this material?

Robert Downey Jnr: Well it's never easy to be relaxed, but we work really hard to make it seem that way and we would write out dialogue to make it seem more nature and have a flow to it, but I think the other great thing about doing a period piece and doing something that's so specific to -- and I really do think Doyle was an amazing, amazing writer and story-teller, I didn't really quite know how great he was until we kept reaching out to find quotes and things he had said or descriptions he'd said or really more philosophical points of view that Doyle used through Sherlock Holmes -- the boundaries are it's Victorian England and they're gentleman and so it's not some of that wavy-gravy free-flowing stuff, there are more boundaries, which I think is a great challenge. 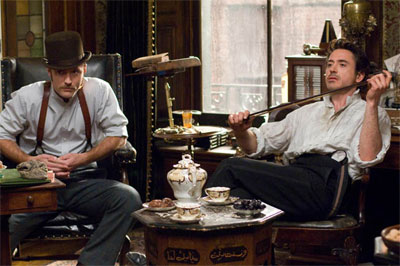 Robert Downey Jnr: Well, I think about rock-stars and they always say their going to retire by this or that age and then I think about other guys who shall remain nameless, one of which just starred with Rachel in a movie, who had double franchises, and I think the thing is if the material is still good and if you still love working with the people you get to work with then why not? I wouldn't want to launch anything else, but I think that Sherlock Holmes in particular has just been such a life-changing experience, the act of researching it and making it and Joel and I get to do something big together and Lionel and Susan and Rachel and Jude, I'm so sorry that he's not here today, he's so the right arm of this movie. He went to go do something undeniably legitimate so he's doing Hamlet right now. We of course say, Hamlet, anyone can do that, he was a huge part of this movie, so really the answer to the question is, I'm down for the cause, by then I'll probably have another kid, a non-alcoholic vineyard.


Describe the relationship between you and Jude in the film.

Robert Downey Jnr: Our fearless leader here, and by the way I've heard this is like a staple now, "We need a sundance-scene there and we need a -- and what's the other scene they need?" It's another thing entirely to get in the spirit of what does that mean? People are so close that they almost can't stand each other, but they can't stand on their own two feet without each other, that's what we really felt. Doyle was giving us the first look at what was essentially a two-hander and Doyle essentially is Watson because he's telling the stories, but saying Watson's telling them. The process with Jude really was -- my assistant who never cares about anything is like standing in the hall, she's like (yawn sound), and he's walking down the hall and you know, he's dressed like fabulous under-dressed and I just said, literally before he said he was available, before he said he wanted to be recorded, we just started talking like two serious actors about what would need to happen to make this work as a piece of straight drama and I think we just became really close really quick because we just rolled up our sleeves and started working from jump. 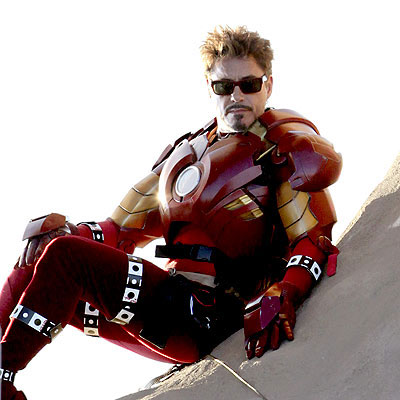 Do you enjoy working a crowd, like you did for the panel in Hall H?

Robert Downey Jnr: Yesterday, for Sherlock Holmes, I became love dizzy and I thought I might lose my footing, so I was transported by it. Today, I had my legs under me a little better. Jon and I worked out a bit, which to me is a huge deal 'cause usually Jon likes going, "You say something funny and then I'll come back. Let's go!" And, he pulls me out on stage, which to me is a little anxiety provoking. Today, we actually worked out a bit, so that was nice.


This movie looks like it's so much fun. How much more fun did you have, this time around? And, did you have a greater degree of confidence, playing this character again?

Robert Downey Jnr: The confidence was higher, but fun was not necessarily the word I would use to describe it. We felt more responsible to spend more time, and we had broadened our cast and horizons, and the story is actually significantly more complex and subtle, while you can still follow it. I don't want to say that it was as fun. It flew by, which was also odd, because we felt every punch, moment, laugh and everything last time. It was a really, really, really trying process to get this done to the best of our ability.


What was the trickiest thing to work out, story wise?

Downey: What does everybody best offer? How do we make sure that all these insanely gifted people who are used to being #1 on their own call sheet, who have come to join us to play, have a real beginning, middle and end? How do we make them pertinent to a story that actually could have easily been told, just continuing along the same lines we were, bringing in another non-descript bad guy and kicking ass? The trickiest part was living up to the ambition. 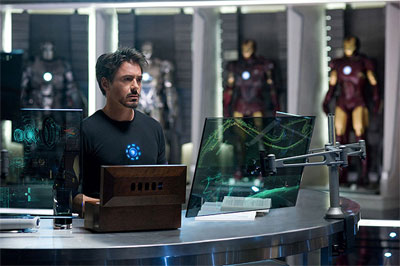 In the first film, there was a show-stopping moment when your heart was taken out, where there are no effects and it's just all acting. Is there a moment like that in this film?

Robert Downey Jnr: A big through-line for this has to do with what did after the credits last time, when Nick Fury (Samuel L. Jackson) comes in and says, "You're part of something bigger than you know." Jon and I are both big Writer's Journey and Joseph Campbell fans. Pretty much everyone is. But, there is something to be said about legacy and there's something that's missing in him. And, obviously, what's kept him alive is a miniaturized version of something his father created, but things aren't always as they seem and someone arrives on the scene. How bad-ass was Mickey Rourke with those whips?


What was that thing?

Robert Downey Jnr: I don't quite understand. [Laughs] But, it seems like it's similarly powered. All I know is that Jon really made some smart moves, in the things he decided to prioritize. To me, this film really is about Tony's secret journey into his deepest fears, his sense of obligation, his sense of legacy with his father, a sense of brotherhood with Rhodey and his ongoing deep love and respect for Pepper (Gwyneth Paltrow)


Was the suit any easier this time?

Downey: Yeah, it was a little easier. Not enough for my taste.


Is there a love triangle between Tony and Pepper, and Tony and the Black Widow (Scarlett Johansson)?

Robert Downey Jnr: We essentially started off saying it's a love triangle, and then we realized that love triangle is done in these superhero movies, all the time. What we wanted to do was something just a little bit freakier than that, and I believe we have succeeded. Black Widow is a great character because she is not what she appears to be. It was a great opportunity. I don't even know if it's so much a love triangle. Pepper is exactly what she appears to be, except there's a lot more going on under the surface, and that's brought to bear, this time. 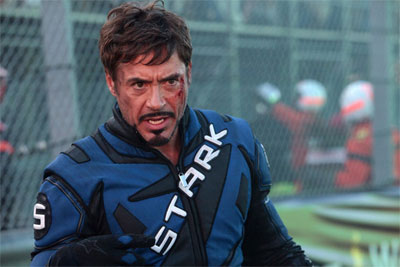 How surprised are you that this Iron Man franchise has changed people's perceptions of you as an actor?

Downey: It's pretty miraculous. But, in the realm of miracles, I think it's probably a two or three 'cause it's a movie industry thing. Nonetheless, it's mind-blowing to me because I'd always felt like I wanted to and could do something like this. It's wild.


How is Tony Stark different, this time around? How has the arc changed?

Robert Downey Jnr: Last time, we saw him as this hapless, charming prick who has his ass handed to him, and turns it around and then is almost snuffed by the very person he thought he could trust above everyone else. To dial it back a little bit, you have to imagine that just because someone has a life-changing experience doesn't really mean they've changed. Tony is seeking solace in the archetype. It's one thing to say you're Iron Man and it's another thing to actually be a righteous person, and I think he struggles with that because he's not really all that different.


So, he has to wrestle with that?

Robert Downey Jnr: Oh, sure. That's not really the point of this one, but if he has a birthday party, expect it to go desperately sour. 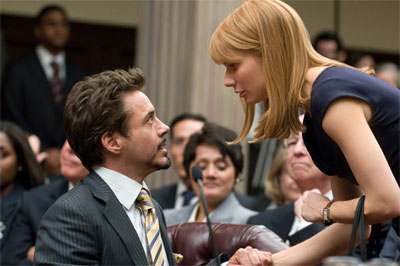 Has the prospect of The Avengers set in for you yet?

Downey: Not entirely. I'm not as savvy about that stuff. I just know that, right now, we've got a really good thing going on and it's most important to not sully that. So, I'll listen to the professionals and I'll just keep selling soap until otherwise notified.


You had such a great year with Iron Man and Tropic Thunder, and now you have Sherlock Holmes and Iron Man 2. Are you feeling it? Is the Robert Downey, Jr. renaissance in full swing?

Robert Downey Jnr: [Laughs] The best thing I can do, and I think this is the thing that's been my saving grace, is consider myself a worker amongst workers. When I deviate from that, things just don't turn out so sweet for me.


Can you talk about Due Date?


And, you're the straight man to Zach Galifianakis?

Robert Downey Jnr: What?! Why would I want to do that? I think Zach and I will have a nice time.

After the massive success of Jon Favreau's IRON MAN in 2008, the helmeted hero returns for this sequel from Marvel Studios.