Joaquin Phoenix is gleefully smoking a cigarette, cross legged on a chair in a Toronto hotel room, as one of his latest films, Reservation Road, is about to premiere. Not one who loves to talk to the press, Joaquin Phoenix talks rapidly about his distaste for what he defines as the process of acting, not the job, but what comes after. "I really don't enjoy so much of what goes into making movies, or the auxiliary effects of them and, nothing personal but it's all about me and my thing about not wanting to talk about everything." By that, Joaquin Phoenix says he means "the press, the makeup, the f***ng hair, and the f***ng wardrobe fitting. I don't mean to sound ungrateful but I mean it's such a small percentage of actual time that I think is enjoyable on a film, that I think it's just easy to get bored be completely disinterested and lazy and just walk away"

In order for Joaquin Phoenix to put up with these auxiliary facets of the movie process, the actor is impassioned, he says, "to find something that I at least think won't ever let me be bored." If one looks at his recent gallery of characters, they are an interesting breed that have appeared in films that Joaquin Phoenix has chosen for his own, often indefinable reasons. Getting him to talk about why he chooses films are not necessarily easy, is a challenge in itself. He skirts around questions pertaining to any degree of methodology. "I don't know that I really have a criteria. I mean I almost most of the time I haven't a clue of what's going on. Like people asking me about 'What is your method?' or 'What is your plan?' To me it's like asking somebody that's fallen off a building and survived like 'What was their method for survival?' " Joaquin Phoenix takes another puff of his cigarette, laughs and says "I don't even know what the question is any more."

The actor is in a good mood, though, and this is evident by the fact that he loves Reservation Road, a taut, dramatic thriller, that casts the actor as a father of two whose life is tragically altered when his son is killed by a hit-and-run driver, who turns out to work for a law firm he has hired to investigate the tragedy. Unlike his more gregarious night-club owner he plays in We Own the Night, Joaquin Phoenix plays a normal father, a university professor, who has to hold in a lot in yet reveal so much in this study of grief. "I was talking to some people that had similar experience s having lost a child, and they all say that it's amazing what a difference in men and women there is in the way they deal with grief, how demonstrative women are with their grief, and how men tend to suppress that. So I thought that that would be challenging in a way, to have so much going on." Phoenix made it a point of "always trying to reduce the amount of dialogue, because it's really not something that somebody can't articulate." 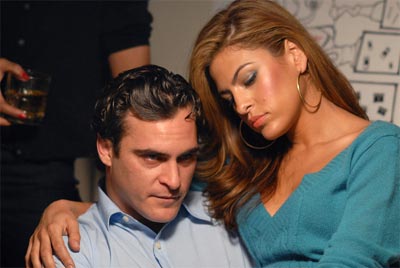 Joaquin Phoenix may have established himself as one of Hollywood's elite, but ask him if he is as impassioned about acting today as opposed to when he started, his response is surprising. "I don't think I am," he says, reflectively. "I have those brief, brief moments and there's maybe one movie if you're lucky where it's as if f**cken time stops, your entire body's alive and you feel like you could lift a mountain, so there's that brief moment where you feel totally, utterly connected to everything, which is extraordinary." Yet he concedes that those feelings came to the surface even as far back as To Die For. "I find it a hard experience to really appreciate a movie, because I'm always just seeing the devices, and you know, so it's very rare movie where I get completely lost in a movie." The actor pauses and admits that's a sad state of affairs. "I mean it's a wonderful medium and it's something that I think I'm not going to be as affected by as I think people are that didn't have that experience. I don't quite know what it is but I suppose it is just a matter of putting in time and being desensitised to some degree."

Asked what he would do if he decided to finally give up acting, Joaquin Phoenix laughingly says, without skipping a beat, "full time dreamer. I'm not qualified for anything else." And he has no interest in exploring other artistic pursuits such as acting. "No, zero tolerance and zero ability. I don't think I have high expectations. I think that I made a few movies and so I feel all right about it, but if I didn't work again I think I'd be all right." Yet, Joaquin Phoenix still works and on material that gets his juices flowing. "Why I take on a project is because I don't understand what it is and something makes me want to understand what it is. It's always hard to articulate what it is in that moment in a script when you go 'Ah, I have to do this' and of course obviously it has to do with the writing. I remember in To Die For it was half way through the script where there was a description of my character or something and I remember it was like this little moment and I went 'F*ck'. I don't know what - but something made it more, 'There's something fascinating in this guy and I want to find out what it is. What does he do what he does? I have to know'. "

For We own the Night, Joaquin Phoenix says, "I'm fascinated by human behaviour and the dynamics between people and in that film between family. So I quite liked the idea of this family, these two brothers that have completely different lives, then circumstances kind of force them together." While in Reservation Road, "it's great seeing that one event affects so many people in different ways, which I thought was really fascinating."

Often defined as a perfectionist to the extreme by his fellow actors and directors who have worked with him, Joaquin Phoenix says he lacks the arrogance to know when he has mastered the perfect take. "I think the moment you think that you're completely f**ked. I've had that experience maybe once or twice and it's the worse feeling in the world, because you don't know. At best what you may have is a feeling of being connected in a moment."

Joaquin Phoenix is about to re-team for the third time with his We own the Night director James Gray, making him one of the few directors who enjoys the scrutinise collaboration with the actor. "Usually they never want to work with me," he says laughingly. "I just think he's desperate, but what I love about James is his fascination with human characteristics that are sometimes less than favourable." he next film is a different piece for both of them, a romantic drama called Two Lovers, opposite Gwyneth Paltrow, about which he offers very little. "We hope it'll be interesting." As dissatisfied as Joaquin Phoenix sometimes feels about the work he does and the process that leads him there, ask him if he would ever seriously give it up, and in between more cigarette puffs, he concedes "I don't know. I mean it's something that's been such a part of my life for so long, since I was eight years old, so I'm not really sure." But what hasn't changed over the years is his attitude towards the press, "because it's tough to talk about yourself and what you do." 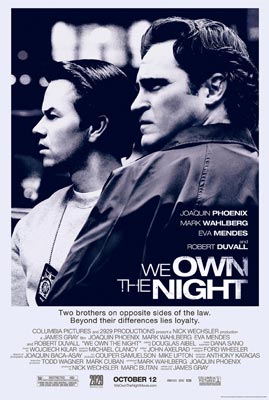 We Own the Night

Bobby spends his evenings in a den of iniquity, indulging in drugs, alcohol, and gambling, and his model-like girlfriend Amada (Eva Mendes) is never far from his arm. Their two worlds meet when the father of the two men, Burt (Robert Duvall), who is also a cop, gets together with Joseph to ask Bobby for information about a patron of the club named Vadim (Alex Veadov). Vadim is the nephew of the club's owner, and also a dangerous member of the Russian criminal underworld. Bobby sides with Vadim, and the tension in Gray's brother-versus-brother potboiler reaches melting point as Joseph goes after both his sibling and his Russian foe.

Wahlberg, Phoenix, and Duvall all deliver high-caliber performances throughout, and Gray suffuses the plot with enough twists and turns to provide a few surprises. New York City is perfectly utilized as a backdrop to the action, and cinematographer Joaquin Baca-Asay manages to get the balance between moody, atmospheric shots and explosive action sequences just right. WE OWN THE NIGHT ultimately resembles an old-fashioned cop film with a little Scorsese-like drama thrown in for good measure, and is likely to gain a following among movie fans seeking retro crime thrills.