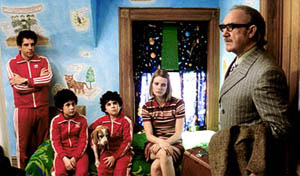 Royal Tenenbaum (Gene Hackman) and his wife Etheline (Anjelica Huston) had three children -- Chas (Ben Stiller), Richie (Luke Wilson) and Margot (Gwyneth Paltrow) -- and then they separated. Chas started buying real estate in his early teens and seemed to have an almost preternatural understanding of international finance. Margot was a playwright and received a Braverman Grant of fifty thousand dollars in the ninth grade. Richie was a junior champion tennis player and won the U.S. Nationals three years in a row. Virtually all memory of the brilliance of the young Tenenbuams was subsequently erased by two decades of betrayal, failure, and disaster. Most of this was generally considered to be their father's fault. "The Royal Tenenbaums" tells the story of a family's sudden, unexpected reunion one recent winter.

Hollywood is often criticized for being overly formulaic, but it appears that for the Autumn/Winter season, that perception may change with a mere handful of films that bring to them a sense of individuality. Thus we should be grateful for Wes Anderson's irreverant dark comedy, "The Royal Tenenbaums", a film rich in character and multi layered to sublime perfection. Anderson, who co-wrote this original script with actor and frequent collaborator Owen Wilson, is one of the most original artists of his generation, lending to his work a voice that is audacious and unique. A fitfully funny blend of satire and farce, that explores the fragility of family through this dysfunctional unit, "Royal Tenenbaums" is not only sharply and eloquently written, but cinematically a visual feast. As a director, Anderson achieves with this film and its predecessor, the hauntingly brilliant Rushmore, that rare combination of director and writer. His work is defined by a rich visual style, but yet doesn't allow his direction to overshadow a detailed sense of character.

In the case of "Royal Tenenbaums", Anderson's ensemble casting works well, but it's Gene Hackman, as patriach Royal Tenenbaum, who is ultimately the heart and soul of this movie. Hackman is spellbinding, a master of comic timing, yet quietly poignant as a man desperately trying to reconnect with a family he had given up on years before. It's a tour-de-force performance by the legendary actor, and one that elucidates a tough character to pull off. Hackman aside, the rest of Anderson's ensemble is fine, especially Paltrow, cast against type as the depressed, socially repressed, chain-smoking daughter, and the indomitable Angelica Huston as the story's matriarch.

Brilliantly intellectual in its comedy, "Royal Tenenbaums" is a remarkable and multi-layered film, a great movie for adults seeking solace from Harry Potter and his ilk, and a film that rewards us with a heightened sense of character and theme. This is shaping up as one of the year's best.