Featuring the Names of 282 LGBTQI Aussies

Absolut has announced the launch of Absolut Love, a campaign that celebrates the stories of Australian marriage equality since the historic YES vote in 2017.

As part of the campaign, Absolut has created one of its iconic posters aligned to its major partnership with Sydney Gay & Lesbian Mardi Gras. Instead of featuring its bottle, Absolut will be featuring the names of 282 of the LGBTQI Aussies who have created history and said 'YES'.

Couples were invited to submit their names to Absolut, as well as share their stories of what the YES vote meant to them. Absolut has also partnered with celebrated Australian street artist Scott Marsh, to paint two of the loved-up couples at sites in Chippendale and Surry Hills.

Absolut has a longstanding history of promoting global acceptance of equal love and continues this tradition with the new campaign, which includes the announcement as exclusive spirits and major partner for the 2018 Sydney Gay & Lesbian Mardi Gras. As part of the Absolut Love campaign, Absolut are showcasing the core theme of equal love and celebrating what this means for the LGBTQI community and beyond.

Scott Marsh, Visual Artist said "The LGBTQI community has been so supportive of my work over the years, so it's really nice for me on a personal level to paint these portraits for Andrew & Paul and Fiona & Sarah and to help celebrate the year that's been since the YES vote."

To kick-off the celebrations, Absolut have released more of its rainbow limited-edition Absolut bottle, as well as rainbow limited-edition Absolut Botanik cans. The limitededition bottle is the latest in a collection of releases that have shown Absolut's ongoing support for the LGBTQI community. In 2008, Absolut was the first spirits brand to adorn their bottle with the Pride flag through a partnership with the flag's creator, Gilbert Baker.

To bring Absolut Love to life, Absolut have also partnered with Merivale at key venues across the month of February. The Beresford will be transformed into a Mardi Gras 'hub' with an exciting program of events throughout the Sydney Gay & Lesbian Mardi Gras. These include the Absolut Beresford Brunches and a live stream of the official Parade in the courtyard. For more information visit merivale.com/mardi-gras

Terese Casu, SGLMG CEO said, "We're excited to be partnering with Absolut again for our Fearless 41st Festival. Absolut has a long-standing legacy of supporting the LGBTQI community across the world, and we are proud to be celebrating the achievements of marriage equality with them this year."

The 2019 Absolut Love posters will be on display throughout Sydney, Melbourne, Brisbane, Adelaide and Perth from Feb 18th. Each couple featured will receive their own copy of the poster. Additionally, Absolut has donated $20,000 to Sydney Gay & Lesbian Mardi Gras community programs that go towards grants, scholarships and creating greater access for disadvantage LGBTQI people to participate in the festival.

To see how Absolut is Creating a Better Tomorrow, please check out Absolut.com 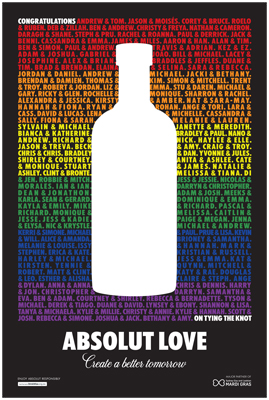 Interview with Sarah and Fiona

Question: What is the Absolut Love campaign?

Sarah and Fiona: The Absolut Love campaign is a celebration of Australian marriage equality and the stories behind the couples that have tied the knot since the historic YES vote in 2017. For us it is so important to have voices that support the LGBTIQ community. It's great that businesses like Absolut are standing up with us too in our fight for equality!


Question: How does it feel to be a couple celebrating as part of the Absolut Love campaign?

Sarah and Fiona: It's very exciting to see us painted on the giant mural on Cleveland Street. After not being sure whether our love and commitment would be celebrated in the same way as other marriages, we are so incredibly proud and humbled to have our love celebrated in this way.

It's an honour to be a face amongst all the other couples that surpassed the obstacles and were able to finally make their commitments official and legally get married. Many waited a lot longer than we did and it's important to remember those who did not get this opportunity in their time.


Question: Can you take us back to how you felt when Australia voted YES in 2017?

Sarah and Fiona: We felt immense relief after a highly stressful and emotionally challenging campaign. To be the subject of a national divisive debate and have everyone have an opinion on your personal life was not easy, to say the least.

There were many tears of joy.

We were in Hong Kong, we celebrated with family over there and then organised a Yes party at a gay bar run by an Aussie ex pat. With a room full of Aussie expats, all affected by the postal survey like we were, we sang the national anthem led by a drag queen and we've never felt prouder to be Australian.

Straight away I felt it was easier to come out about our relationship. A phone call the week after getting an insurance quote, I corrected the usual "what's his name?" after mentioning my fiancé and received an excited "congratulations!" - far less awkward than these moments often are.

We felt prouder than ever walking down the streets of Sydney holding hands.


Question: Can you tell us about what you wrote in your Absolut Love campaign submission?

Fiona: "My partner Sarah of nine years and I got married on 24.11.2018 in front of over 100 family and friends. It was truly the best day of our lives and meant we were able to declare our commitment to one another in front of our closest friends and family. I just fell in love with Sarah all over again that day. We would be so happy for you to share any of our wedding photos during your Mardi Gras campaign."


Question: How did you both meet?

Sarah and Fiona: From our wedding ceremony:
Nine years ago, [nine and a half years now] long before the days of Tinder, and at a time when online dating was not the norm as it is today, Sarah and Fiona first encountered each other when Fiona messaged the cute girl with the good taste in music she'd found online.

After a few weeks of late night chats, they finally met in person when Fiona made the trip down to Sydney to meet Sarah at the Townie. Fiona thought Sarah was even more beautiful than her photos. She'd had a few drinks already and was so nervous she kept laughing awkwardly at everything Sarah said. So much so that Sarah thought Fiona didn't like her at all. But they persisted and after a bar crawl through Newtown the night ended with a kiss outside the bathrooms at the Sly Fox. Nothing but romance for these two!

Their second date was on the Central Coast for one of Fiona's gigs. Sarah was so impressed by Fiona's confidence and talent.
Sarah didn't get a kiss that night. But she did get a speeding fine on the drive up, which shows just how keen she was to get there to see Fiona again.
Fiona tried to play it cool and casual for a long time, but really she was totally smitten...


Question: Can you tell us about your wedding?

Sarah and Fiona: As cliche as it sounds, it really was the best day of our lives.
We were married at Margan winery in the Hunter Valley


Question: What advice do you have for young LGBTQI Aussies?

Sarah and Fiona: The world is changing and becoming more inclusive and a safer place so be yourself and be proud. You're fabulous just the way you are and you will always have a community of people who support you.


Question: What's next for you both?

Sarah and Fiona: After planning a wedding we suddenly feel free and we have so much time on our hands! We're both big foodies and love cooking so we're back getting creative in the kitchen and we've started an Instagram "Two wives, two knives" that we hope to turn into a food blog. We would also like to apply for My Kitchen Rules.

We are planning to start a family and look forward to becoming mothers in the next couple of years.