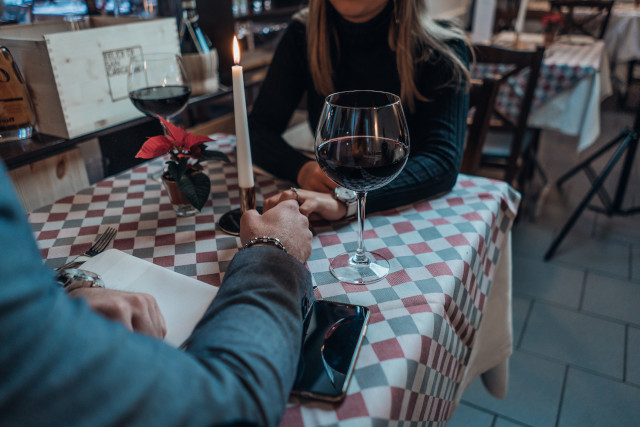 Starting a conversation with a guy might be intimidating. As women, we've been taught from a very young age that men should make the first move. However, that's not the case today. Men love confident women who aren't afraid to approach men.

That said, you don't have to practice cheesy pickup lines or read hundreds of seduction manuals. Men aren't that hard to talk to, so all it takes to break the ice is a fun, lighthearted conversation opener.

Here are some simple ways to start a conversation with a guy you like, both online and offline. Remember that practice makes perfect, so don't hesitate to try them today with the first hottie you cross paths with!

Ask him a fun personal question

If you're trying to initiate a conversation with a guy on Tinder, or you just slid into the Instagram DMs of your hot colleague, typing "Hey" is not a good idea. A sexy guy receives heaps of similar messages from many women, and it certainly doesn't help you to stand out from the crowd.

Instead, why don't you break the ice with a funny yet meaningful question? A question requires an answer, so he'll be more likely to text you back. After he replies, you can give your own answer to the question to keep the conversation going.

For example, if you asked him "Where would you go on a trip if you could leave right now?" and he answers "Japan", you can say "Oh, that's interesting. What do you want to see there?" and then you can discuss his answers before giving him your choice.

Choose a personal topic to create rapport and intimacy, but keep things lighthearted.

Another great way to start an online conversation and keep it interesting is playing texting games. For example, you could suggest your crush to play "Would you rather …" over text. It's a game that can quickly progress to flirty and even sexy questions, if you're both in the mood for it.

Alternatively, you could try playing "Kiss, Marry, Kill". You name three celebrities, and he decides which one of them he would kiss, marry or kill. Then, it's your turn! If you prompt him to explain why he chose to marry or kiss a particular celeb, the game can turn into a fun way to learn more about him and what he wants from a relationship.

Send him a meme

If you really don't know how to break the ice, send him a funny meme. You can accompany it with your own caption like, "This is so me!" or "Can you relate to this?"

Just avoid sending him anything vulgar or controversial. Cat and dog memes are always a great choice, and they can really brighten his day. Alternatively, look for memes that feature popular characters from movies or shows that he mentioned on his profile.

It conveys that you have a fun personality without making you look like you're trying too hard to attract his attention.

Ask him for help when he's around

The damsel in distress stereotype is partly true: Men like to help a woman! Asking for help is an easy way to break the ice offline, especially if you're not just in the market for finding a casual hookup.

If you like a coworker, ask him to help you with one of your tasks, but make sure that it isn't too burdensome for him. Otherwise, your request won't help to create the mood for some flirting. After he's done helping you, ask if you can repay him by buying him a drink at the coffee machine.

Be careful not to overdo this. It's okay if you ask him for help once as an excuse to invite him to grab a coffee. If you do it every week, instead, you'll come across as needy, which isn't very sexy.

Say something that doesn't require a response

Psychologist Jeremy Nicholson suggests on Psychology Today a very easy way to break the ice in any social situation, including with your crush.

He suggests that you make a statement that doesn't necessarily require a response. "This is simply saying something to the other person, or about the general situation, without desiring a response from them at all," says the expert. "It is just you expressing your opinion."

This way, if the guy wants a conversation with you, he will be prompted to say something. If he doesn't, you won't lose anything.

If you're on the subway next to a cute guy, comment on how crowded it is. If you spot your office crush at the coffee machine, comment on how good " or bad " the coffee is. Try to avoid whining as much as possible. If you need to say that the coffee tastes awful or the train is late, say it in a lighthearted way.

Ask his opinion on something

Asking someone what they think about something is flattering, because it shows that you really care about their opinion. Only, remember to keep the conversation light, avoiding controversial or intense topics.

Who doesn't like to receive a compliment? If you don't want to come off too strong or look needy, however, try to avoid comments on his looks. You just need to start a conversation, not to tell him straight away that you find him attractive. Keep the mystery alive for a little longer!

If you're chatting online, find something interesting mentioned in his profile, then compliment him about it. For example, you can find out that he volunteers at a charity or has accomplished a lot in his career.

If you have a crush on a coworker, praise him when he reaches a certain milestone or helps the team to succeed. If you want to chat with a guy on the subway, you can ask if the book he's reading is interesting or that his shoes look cool.

Photo by René Ranisch on Unsplash