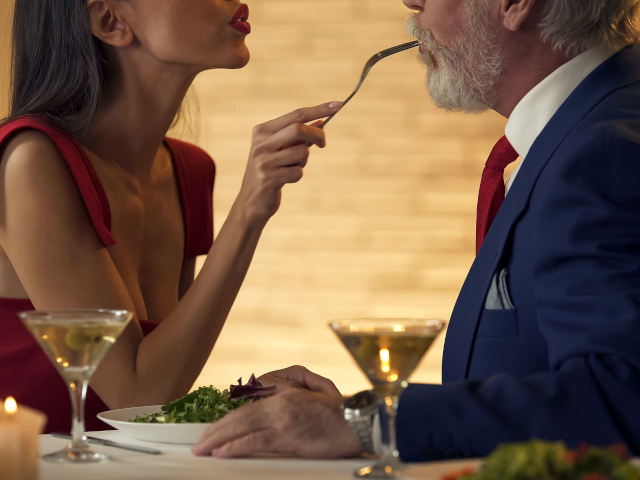 Many beautiful, intelligent young women these days prefer dating older men, and it's not hard to see why. It takes most men years to develop the emotional maturity, financial security, and strength of character a high-quality woman deserves in a partner. And naturally, no woman wants the job of mothering her boyfriend through the years leading up to that.

Skipping straight to dating older men lets a young woman go through life with a partner who already knows everything he needs to know about being a good, loving partner. But if that's something you want for yourself, then it's important to know what hot, desirable older men are looking for in the women they date. Here are a few examples.

1. Older men love intelligent women.
You don't necessarily need to be a rocket scientist to impress an older man and get him to look your way. But older men want to be with women who have more going for them than just pretty faces. An older man wants someone who can hold up her end of an intelligent conversation.

He also wants someone who can be a true partner to him in every way. An intelligent woman can help an older man think his way through touch decisions. She can keep him stimulated mentally, as well as challenge him to be the best possible version of himself.

2. Older men like a woman with goals.
Many older men absolutely love the idea of being a gorgeous, young woman's sugar daddy and making sure she's spoiled well and never has to want for anything in life. But that hardly means he doesn't want her to have goals, dreams, and ambitions of her own.

An older man loves a woman who wants to be somebody and dreams of changing the world for the better. He wants someone creative and savvy he can admire and take pride in. So don't undervalue your independence when it comes to your ability to attract the right older man.

3. Older men like to feel needed.
While it's true an older man loves an independent woman, he doesn't want her to be independent to a fault. He also needs to feel needed by his partner. He wants the opportunity to do things for her and make her feel special, especially if he dreams of being a bit of a sugar daddy.

So be independent and definitely be willing to do for yourself when it makes sense. But you should also be open to letting the older man in your life help you out and make a contribution to your life now and then. He wants to be part of your overall wellbeing, and that's a wonderful thing.

4. Older men want to experience romance.
It's a common misconception that older men prefer complete predictability in their relationships – a commonplace routine that quite literally never changes – this really isn't true. While many men are definitely over activities like partying the night away or clubbing until dawn, they still want energy and excitement in their lives.

In particular, older men want to be with a woman who's into romance and can help him experience more of it. So if you're serious about appealing to an incredible older man, it's a good idea to let your romantic side show. Be prepared to create special moments with someone and savor every detail of being together.

5. Older men want to have fun.
Again, most older men are going to be pretty over the party scene, but that hardly means they don't like to have a good time. Their tastes are just a little more sophisticated, which is a very good thing for sugar babies looking to raise the bar when it comes to her love life.

That's exactly why a distinguished older man loves the idea of being with a younger woman. She has the capacity to make him feel young again in all the right ways. She's still vital, energetic, and interested in the world around her. And he loves the idea of experiencing the best life has to offer with her at his side.

6. Older men are looking to make a real connection.
An older man has likely been there and done that when it comes to many things in life. He's dated around. He may even have been married before. He's had his share of both good relationships and bad ones, so he knows just how rare and valuable a genuine connection is.

And that's what he's looking for at this point in his life – a real connection with a wonderful, young woman who's ready to be loved, treasured, and cherished by a man who truly sees her value as a partner. So if that's what you want, too, then finding an older man on a sugar dating site like Sugar Daddy for Me just might be the great love you've been looking for. Are you ready to experience it?