How to Be the Sugar Baby Every Sugar Daddy Fantasizes About 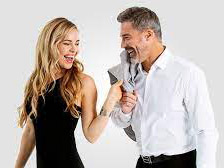 Let's face it. Genuine sex appeal that leaves a sugar daddy thinking about his sugar baby even when she isn't around is about a lot more than just being good-looking. So much of what makes a person sexy is about how they speak, behave, and carry themselves.

It's that elusive X-factor that has the power to keep your sugardaddy fantasizing about you and feeling perpetually lucky that he's the number one guy in your life. Here's a crash course on becoming that woman – the kind of woman who knows how to stay on a man's mind long after leaving the room.

Although "sexy" can vary a lot from woman to woman, there's one trait all sexy women have in common – confidence. These women know in their bones that they're something special, and they carry themselves that way. They're also the type of women who absolutely expect to get what they want and deserve out of life.

So whether you're currently in a relationship or not, it's officially time to start taking up space in the world without excuse or apology. Whether you're single and looking to attract a dreamy sugar daddy, in a relationship with someone whose fantasies you want to fulfill, or something else entirely, know that you have what it takes to get it. Don't worry if it's tough at first. It's totally OK to fake it 'til you make it.

Learn what he likes (and master it).

Whether you've got a particular guy in mind right now or are simply hoping to manifest the right one in the future, you need to know what a man's fantasy is before you can fulfill it. Some guys are absolute suckers for put-together women in heels, stockings, and perfect makeup. But others think a woman's at her sexiest wearing nothing but one of his shirts, a messy bun, and zero makeup.

So spend some time getting to know what your guy is into. Pay attention to comments he makes about what he thinks looks nice on a woman, and note his reactions to various things you might try. Then find a way to put your own spin on those little tidbits and make them your own.

Take pride in yourself.

Sugar babies care about more than just the impression they make on men or other people in general. They see themselves as incredibly worthwhile, worthy of being spoiled and they treat themselves that way. They know that self-care and self-love are essential parts of living your best life at your most attractive.

So take good care of yourself on every level. Exercise regularly and eat right. Keep stress to a minimum and be sure to get plenty of sleep at night. Make room in your life for the things that bring you joy and peace, as well. The more you invest in yourself, the better you'll feel and the sexier you'll be to the remarkable man in your life.

Women who are sexy and whose men can't stop thinking about them don't stick to the same dull routines day after day, month after month, year after year. They're energetic and enthusiastic – women who aren't afraid to change things up and try something new once in a while.

So be the type of woman who does things differently every once in a while, just for the sake of trying something new. Fearlessly switch up your look just for fun. Embrace new challenges in your personal life. Don't be afraid to suggest new things to do with your guy, as well, both in and out of the bedroom. Sexy women aren't predictable or sedate. They live life to the fullest in every way.

Be open to making his fantasies come true.

Although no one should ever pretend to be someone they're not or do things that make them genuinely uncomfortable, there's just something about a woman who likes the idea of exploring someone's fantasies with them. Most men are used to dating ordinary women who won't go the least little bit out of their way to please the men in their lives, so being different in this regard gives you a natural edge.

Listen to your guy when he tells you things about himself or that he fantasizes about. Take notes, and then surprise him when he least expects it. It won't be long before he associates you with the idea of getting to be his free, unfettered self in all the right ways.

As you can see, sexy is less about maintaining a specific look or acting a particular way. It's about a state of mind – an attitude. Start embracing that attitude for yourself today, and it won't be long before you're a positively intoxicating influence on the sugar daddies in your life.