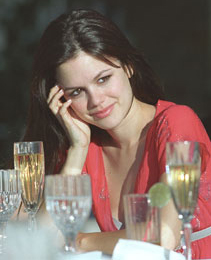 BILSON HAS A FIRST KISS MOMENT.

Rachel Bilson may shy away from her style icon status, but the beautiful, petite, 25-year old dresses the part, from her Prada shoes to her stylish, golden jacket, but offers a smile when suggested that her hit TV series The O.C, has resulted in the young actresss evolvement into an unexpected style icon, but in an industry where it is the norm for celebrities to dress a certain way, Rachel Bilson does her own thing. "You know in the business I think everyone needs somebody like a stylist to pull clothes for you when you have all these events because you cant shop that much and youre not going to buy all these gowns for thousands of dollars. However. I definitely pick out what I want, no one styles or dresses me and one of my best friends is a stylist so it works out perfectly." She says she admires Kate Moss "which I think that is an obvious choice because she has always been true to herself, tried new things and hasnt really cared what other people thought. But I also respect people like Diane Keaton who is always an individual and I think its important to have individuality in your fashion sense - you want to be different to everyone else. For myself, I am a vintage fan through and through while mixing a little designer in there. Its kind of an expressive way of showing who I am. My style changes."

Rachel Bilson is defined by her sense of individuality and risk-taking adopting, for her first movie role, to play a seductive college student who beds and woos a 29 year old already ensconced in a three year old relationship with his now pregnant girlfriend, in The Last Kiss, a Hollywood remake of the Italian award winner. Rachel Bilson admits it was a challenge playing the other woman who is a seductress, but one who cannot come across as merely the bad girl. "Thats the whole point because she is the other woman and his case it was important to make her as likeable as possible. After all, you dont want to be thought of as the bad character, so. It was really important to paint that picture." Rachel Bilson says that to some extent, she could relate to the character. "I wouldnt have done exactly what she did, but responded to her quest for finding a guy that you are completely infatuated with and just kind of just doing everything you can to get him," she says, laughingly. "But I wouldnt cross the line and pursue it like she would. I would properly ignore him but that would be my way of trying to get the guy." In a film that explores sexual morality, Rachel Bilson is quick not to take sides in the debate as to who is at fault. "I really believe that theyre both at fault in a way, because there are two sides to everything and it always takes two and all of that, but I think with this movie there are a lot of moral dilemmas so to speak." 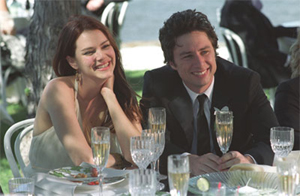 The film calls for Rachel Bilson and Zach Braff, playing her amoral partner, to engage in a hot and sweaty sex scene. The actress, mindful of her younger O.C fan base, says she was unconcerned by how such a scene would effect her television audience. "It was personal thing for me not to show skin, but I think it was an important part for the movie and if Im committed to a movie and a role in a movie I will do whatever calls for it. But it was done in a tasteful way and Zach was very respectful," she hastens to add, laughingly. While this movie is called The LAST Kiss, Rachel Bilson smile when recalling her real-life FIRST kiss. "My first real kiss was behind the school library. I was in 6th grade, about 11 or 12," she recalls. Times have changed since those innocent days, and Rachel Bilson says you can tell a lot about a kiss. "I think kissing can be more intimate than a lot of other things at times and you can tell a lot when you first kiss a person - if its there you know it by a kiss and I really believe that." For this young lady, she had her share of bad kisses, and offers this piece of advice for prospective suitors. "As long as theres not too much saliva involved, but just enough, you dont want to be swallowing too much yuck stuff."

From kissing to career, Rachel Bilson has been with The O.C since 2003, and remains surprised how this prime time soap opera has evolved into such a cult hit amongst teens. "You know its crazy and with television especially, you never know what is going to take off. To be on a show that became what The O. C has, is just an amazing thing because you know it started off with Doug Liman directing a pilot, having a great group of actors and really believing in it but you never know what you are going to get so to achieve what we have is just really amazing." Rachel Bilson says she has no plans to quit the series. "I have to do it if it goes for seven years, as Im in a contract." The key is for Rachel Bilson taking on challenging roles during her annual hiatus. "I think that is really important, especially for me. Im not just going to work, because there are films that you just could just do such as genre pictures and what not. I waited for a role like this in Last Kiss with such amazing people and a really credible movie, so I just want to wait. If necessary, Ill do smaller roles until I get to where I really comfortable and maybe taking on my own movie. People do definitely type cast you as your character on the show and they want you to do teen movies and things like that so it was really important for me to wait and be patient until the right one came along. I really worked for it, auditioned, I really wanted this role and to be involved with all of the people behind the scenes and in front of the camera."

Rachel Bilson has also learned to deal with the celebrity facets of the business, dealing with the fame that has come out of her recent success. But a clearly pragmatic actress, she seems unphased by the media spotlight. "Well for me I dont have it nearly as bad as a lot of other girls out there and that just comes along with it and you cant really get it let to you. You know that its a part of it and you leave it at that as you cant make it a part of your life. Its just out there and its going to be out there and thats inevitable." The actress, who wont comment on the status of her relationships, says she does try to protect her privacy. "I just think its important to lay low, because whats personal to you, you want to keep personal because everything else of you is so exposed." The actress protects herself from the prying media, by not "putting too much of yourself out there, because then theyll know you as you and it becomes harder to believe you as a character."