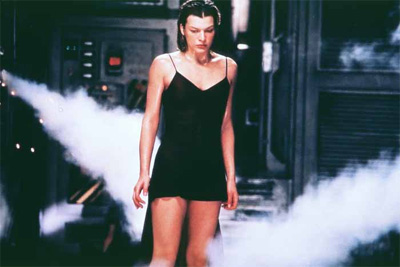 JOVOVICH BACK IN FINAL RESIDENT FRANCHISE

Looking very pregnant, Milla Jovovich is in the midst of the chaotic Comic Con to talk up her latest and final film in the Resident Evil franchise. Not even impending motherhood can stop the actress from being in San Diego to give her all to the franchise that established the actress as a major action heroine.

She spoke to Paul Fischer.

Paul Fisher How are you surviving?

Milla Jovovich: In my condition? [ Laughs ]Good! I am having some problems getting from point a to point b. I read all these stories about how active Naomi Watts was till the last few weeks and I'm like god you know that's incredible because I just feel like I can hardly movie. I am swollen and like everything. I can hardly make a fist [Laughs].


Paul FisherConsidering your on-screen persona in this film, is it weird to be in this condition right now and at Comic Con?


Paul Fisher So why were you ready to revisit this character and do Resident Evil Extinction?

Milla Jovovich: You know it's funny because when I read the first script I really wasn't because Paul had sort of written me as this monster type and I said no to the movie. So they rewrote everything and then I read it again and was like, oh ok this is really good. I had a lot of fun reading it and you know gosh after you have been doing this for 5 years how can you sort of say goodbye especially if you like what your character is doing. Just the thought of a DVD box set was fun and you know it just seemed like kind of well rounded to make the 3rd movie.

Milla Jovovich: I don't really watch zombie movies. I mean this is kind of what it is for me. It is very much in its own world. My brother and I used to play Resident Evil the game all the time, which is how I discovered this whole world. I never watched zombie movies but played the games with him.


Paul Fisher How have you along with the character changed over the last 5 years?

Milla Jovovich: Well I think the character has definitely had some enormous changes as well as myself. You know in the beginning she was very naive. She was very innocent and you know once she gets her memory back and understands her role in this whole accident and disease breaking out. I think she goes through a lot of self-hatred. I think in the second movie she really hates herself in that sense and she really does not know what to do about those feelings she just knows that she's a monster in a sense and I think through the third movie she's chosen to isolate herself from the people she cares about in a way she's trying to redeem herself. Me personally I have had a lot of changes I have had to deal with. I have had to deal with the death of a friend, starting a clothing line, which is incredible, now getting pregnant. It's quite a ride!


Paul Fisher How have you been able to balance all these things, motherhood and career?

Milla Jovovich: I do not know once babies here what it's going to be like. It kind of has to happen. I imagine in a perfect world I can keep working for the next 3 years or so. When she starts pre-school is when I will take time off and really be with her. I figure as long as she can come with me I can work still and do all the things I did before. When she has to stay in one place is when I will take time off. I figure I will be 35 at that point and will have been working at that point 25 years in this career and you know I can take a break and just be a mom for 5 or 6 years. Come back a sexy older woman. [Laughs]


Paul Fisher You always play larger than life characters, why is that?

Milla Jovovich: Well I do not know. I guess you know people like to see me in these extraordinary characters you know, anything that is sort of made in a laboratory is sent to me you. It's unfortunate because I have done quite a few independent movies; I have done comedies, different dramatic roles that people just don't get a chance to see since these movies get out to a bigger audience. But I do a lot of different stuff in my life. Everything I do is stuff I believe in which is why I think in a way I am still here working and still have interest in it.


Paul Fisher Do you still do music or have you given up on that?

Milla Jovovich: You know for me music has always been a personal experience for me. When I recorded my first record 10 years ago it was very hard for me. I was made to focus on music as business and I felt like my whole life was always a business. Every part of my talent was somehow exploited in a career sort of way. So after I promoted my first record I sort of said you know what, that's it. Suddenly there was just a lot of pressure to do things I didn't want to do and make compromises. So now I just record stuff and put it on my website, people can download it for free. I do stuff for my friends; I record stuff on soundtracks I do show and stuff. It's much more personal and a lot less career oriented.


Paul Fisher How did doing your own stunts in Resident Evil compare to your previous work?

Milla Jovovich: It's interesting because these knives that I use in the film are Tibetan weapons and are actually one-handed knives. The fact they have never been screened before, this is the first time the weapons have ever been filmed and for me to have two is super violent and super insane. Not even the Tibetan monks thought of this. I have to say I love them and I had so much fun working with them. They are so versatile. You can slice, you can hack, you can spread mayonnaise with them, slice cucumbers, de-bone chicken. It's like one of those really versatile weapons I just love.


Paul Fisher Did you take them home with you?

Milla Jovovich: Oh are you kidding? I have them... I do! I have so many weapons at home its hilarious. People come over and I will show them off and be like what's up? You want some juice? Especially while I am pregnant. It's just the funniest thing to see this wobbly pregnant thing all with her knives going, what's up? It's relaxing. For me martial arts are something that is really amazing and really focuses my mind and relaxes me. I was saying earlier went through the death of a friend and it was really the only thing that brought me out of my depression was doing the martial arts and sort of conquering challenges that I didn't think I would be able to conquer and then doing them. I love it; it's such an amazing sport.


Paul Fisher Are you doing any other work?

Milla Jovovich: Well I have this film I was going to do with director Paul Verhoeven which I should be shooting right now but I had to cancel a film this year so they will be moving it called the Winter Queen based on a Russian novel. So hopefully if he has the time and everything goes as planned we will do that next spring maybe early summer. So for the moment I might do a small part for Wim Wenders again he has a film he is working on he wrote a part for me pregnant into it.