Meg Ryan In the Cut: America's Sweetheart Opts for Dramatic Change of Image 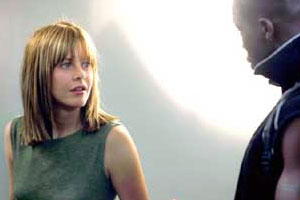 Meg Ryan/In the Cut Interview by Paul Fischer at the Toronto Film Festival.

Meg Ryan is not interested in talking about an image change, as she stars in the sexually provocative thriller In the Cut, from Aussie-based New Zealander Jane Campion. "This is not a conversation I am interested in, because you [the media] do that. I do not cultivate image, you know, that is your job," Ryan, says, almost defensively. "I know there are plenty of people whose job it is supposedly to do that, but I think an audience sees that, and they see an attempt at cultivation, and it seems so inauthentic. So my feeling is that I just do not believe in that. Obviously, the way you see yourself and how other people see you is entirely different. Everybody has that experience, only mine is weirdly amplified. I've been assigned an archetype and that's nothing I have raised my hand to have, although there are worse things to be called than America's Sweetheart, right?" Ryan may hate talking self-image, but how can it be avoided, given her track record? "I've made 30 movies, seven of which are romantic comedies. So breaking out of something, not breaking out of something, it's just that I feel I'm being asked to react to something that I'm not really up to speed with, but I do understand the idea of being assigned a role."

Arriving in Toronto for the film's world premiere, Ryan, tightly clad in a brown leather jacket, her blonde hair looking ruffled, is prepared to talk about the sex and nudity employed in Campion's adaptation of the Suzanne Moore novel. Ryan had to fight for the role after Nicole Kidman pulled out of the controversial project, and if the actress was ever going to be concerned about the film's sexual content, she didn't care. "It was kind of a no brainer going ahead with it", Ryan says in a Toronto hotel room. "I thought something about it was very familiar to me, about the story, when I read the script." She admits it might have been a bit scary "but not THAT scary because it is Jane, great people, I knew I would be in great hands and I think that telling this kind of story now is something I want to do."

In the psychological thriller, Ryan plays a lonely language teacher who becomes involved with a sexually aggressive and morally questionable cop, played by Mark Ruffalo, who in turn is on the trail of a violent serial killer. As in the Moore novel, the film treats sexuality with great candour, and perhaps Ryan would not have been as keen to be as sexually raw, had there been a male director at the helm. "It is just her. Generally, the way she treats the sexuality in her other movies are cool and interesting and not exploitive." Ryan says that she "loved the sex scenes in this movie, because they are really, really not coy, but truly honest." Ryan wants to downplay the film's sexuality, believing that the film's sex scenes "are the least shocking thing about the movie; I think the ideas are really big and beautiful and worth talking about more."

But whether or not In the Cut goes beyond sexuality, it is still a given that with Meg Ryan baring body and soul for her art, the conversation steers back towards the sex and nudity. At this year's Toronto Film Festival, more films dealing with sex have permeated their way into the mainstream. Is this a new trend? Ryan doesn't think so. ". I am not aware of that, but I know that this one sex is used in such a smart way," she says, loving how it is sort of 'devolutionary', meaning, "they start out and they're just fucking, and then it sorts of evolves into a kiss." Ryan sees the film as "a movie about intimacy, as well as about grief, sadness, soul connection and about love vs. romance."

Without giving too much away, Ryan says that easily identified with "every aspect" of her character, perhaps the most complex character the actress has ever played. "I came to think that she was somebody who was in a kind of remission, that she has been so disappointed, so heartbroken, had so much grief, and has all these things that keep her in this kind of a remission, that shrink her into a little dot inside herself. Then the story is about how the universe comes in and doesn't allow her soul to be alone, so I think it's about that kind of love versus romance. That's how I think the sex works very well in the movie, because it's so not coy or 'prettified' "

In trying to finally establish if there are any parallels between Meg Ryan and In the Cut's Franny, there is finally a hint as to why she may have responded to her with such voracious ferocity. "Franny is not interested in pleasing anybody. She doesn't care what people think of her, which is liberating when you get to inhabit that character for a while." Perhaps the same applies to America's former sweetheart.