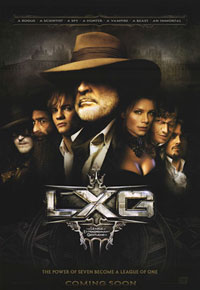 IN AN AUSSIE LEAGUE OF HER OWN

Peta Wilson may well join the ranks of her fellow Aussies in Hollywood, on the brink of major stardom, starring opposite the legendary Sean Connery in The League of Extraordinary Gentlemen, but as this very Aussie actress told PAUL FISCHER in this exclusive interview, Hollywood stardom isn't necessarily her biggest priority.

The voice on the other end orf the phone is unmistakably Australian - and deep, very deep Peta Wilson may be an Aussie through and through, but American TV viewers better know the statuesque 31-year old blonde beauty as La Femme Nikita, than in her native homeland where she has never worked as an actress. Wilson, whose big-screen Hollywood career is about to be launched with the eagerly anticipated fantasy adventure, A League of Extraordinary Gentlemen, has no doubts why Australians are suddenly proving to be such success stories, here in Hollywood.

Wilson lives outside the N.S.W. coastal town of Coffs Harbour, not far from the likes of Russell Crowe and Jack Thompson, but laughingly denies being part of that duo's inner circle or clique. "I don't know mate. All I DO know, that in my life I'd WISHED to be part of a clique. Wilson, who leapt to fame in the title role of action heroine Nikita, and is now front and centre as Mina Harker in the unusual period adventure film, League of Extraordinary Gentlemen. New to the silver screen she may well be, but getting this plum gig opposite Sean Connery was not that difficult, Wilson explains. "I had previously tested for another Fox film a few years before, so when the actress who was originally cast in this pulled out, the studio sent the tape of that old test to the director and Sean [Connery]." Fortunately for Peta, she won the chance to audition. "I was sitting in my little town outside of Coffs Harbour when this happened, and from the time my agent spent 3 hours faxing the script to me, I had very little time to prepare for the audition," which entailed the actress grabbing an old local from town, "who blew bubbles" to read one of the characters, while her uncle shot the audition. Six days later, Wilson left her sleepy Aussie town for the more exotic Prague. With the release of League of Extraordinary Gentlemen, Wilson is part of the new Hollywood elite, this down-to-earth Aussie girl starring with a Hollywood legend in a big summer movie. Sean Connery is cast as renowned adventurer Allan Quatermain , who leads a team of extraordinary figures with legendary powers to battle the technological terror of a madman known as "The Fantom." This "League" comprises seafarer/inventor Captain Nemo, vampiress Mina Harker (Wilson), an invisible man named Rodney Skinner, American secret service agent Tom Sawyer, the ageless and invincible Dorian Gray, and the dangerous split personality of Dr. Jekyll/Mr. Hyde. It's certainly a big film for her first major venture into mainstream Hollywood, and is unconcerned that audiences may not be focussed on the acting. So are no pitfalls in doing a big, Hollywood film, counters Wilson. "There are no pitfalls of doing ANY job, because you HAVE to work, so you can learn and grow. This is my first big Hollywood film but a great experience. It was difficult for sure, because it IS so big, and there are so many special effects and actors, but exciting nonetheless." As for the rumoured fighting that occurred between director Steven Norrington and star Connery, Wilson responds carefully. "Do you think such things didn't occur with Kubrick and Polanski? I think Norrington is a genius whom I think is extraordinary and the truth will come out when people see the film."

Wilson was something of a nomad growing up. Born in Sydney, she spent some of her earlier childhood in New Guinea, then all over Australia. One can imagine that having lived such a nomadic existence, would have fuelled in her a desire to act, but not necessarily, she says. "When I first studied drama, I didn't really know what I wanted to do, though my family all thought I was an actress from the day I was born", she says laughingly. "I went to drama school in the hope that by studying it properly, I'd get whatever this was inside me, out of my system, then I could be a nurse or have a normal job and settle in one place." Of course, the best laid plans and all that, for as Wilson would ultimately discover during this period, "I found what I should be doing ith myself and what Id been raised to do, I suppose." For Wilson, her love of acting had to do with fitting in as a kid, "emulating what a lot of the other girls I went to school with, were good at", says Wilson. The would-be actress at the time grew to love this strange way of looking at the world. "I loved the art form of investigating another person's LIFE," explains Wilson.

Yet Wilson never pursued her dream to act professionally in her native Australia, nor did she head to Hollywood with dreams of stardom, but a broken love affair that brought Peta to the States. "I had been in love, and when we broke up, I did the classic thing and said I'm leaving to travel across America." Wilson had actor friends in LA but didn't necessarily have plans to take on Hollywood. She was a mere 20-years old when she arrived. "But then this friend, who was an actor, suggested I do it, so he put me in touch with the teachers he'd worked with." Wilson studied acting for five years, she recalled, before eventually hitting the pavements of Hollywood, nerve-stricken, following every meeting and audition. Roles in lesser known films such as 1995's The Sadness of Sex and Naked Jane quickly followed, before, two years later, she landed the title role in the long-running TV hit Nikita.

Wilson admits that she still gets nervous before undertaking a new job, but all that's quietened down since giving birth to her son 16 months ago. "She's my priority and so much more important, so I don't get as nervous anymore. I'm much more relaxed, which just makes my life as an actor more enjoyable." Wilson refuses to talk much more about her child, or her father, though begrudgingly concedes that "I am not taking care of my son on my own. I'm not a single mother and his father's very much in his life." Wilson very much calls Australia home, and only travels to the US these days, for work. Wilson is philosophical as to how the possible success of her first big Hollywood outing will effect her career and life, taking it all in her stride. "Mate, I really hope it does well, because I've got a little baby and I'd really like a great job. But having said that, I made a decision when I had my son, that he was the most important thing in the world. So if I get another great job, fabulous, but if nothing happens to me, andI've just got my son, family and friends in my little Aussie town, I'm doing well."

THE LEAGUE OF EXTRAORDINARY GENTLEMEN opens on August 14