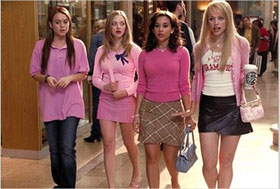 If one was to believe recent tabloid reports, Lindsay Lohan is not so much a mean girl but a party girl. But Lohan is the first to deny such rumours, despite arriving for interviews promoting her latest film, the ferociously comic Mean Girls, looking exhausted and not as 'up' as she was when we spoke about Freaky Friday. "I'm tired and didn't do anything," Lohan says laughingly. Taking time to warm up, Lohan is anxiously awaiting the arrival of a late breakfast, sporting what the soon-to-be 18 -year old starlet describes as a "vintage T-shirt". When it comes to discussing her Mean Girls role as a naïve teenager caught up in a world of adolescent meanness, Lohan acknowledges that she can relate to both the outsider and mean-spirited natures of this latest character, which manifest themselves throughout. "I think I can relate to both. I mean, in high school, you kind of mix around with different people, and you become different - you know what I mean? You hang out with different people and you kind of are that person when you're in that group of people." That is precisely the predominant theme of Mean Girls, a satiric comedy penned by TV scribe and actress and Tina Fey. The film revolves around Cady Heron (Lohan) who was raised in the African bush country by her zoologist parents, and thinks she knows about "survival of the fittest." But the law of the jungle takes on a whole new meaning when the home-schooled 15-year-old enters public high school for the first time and falls prey to the psychological warfare and unwritten social rules that teenage girls face today.

Lohan insists that she was not necessarily a part of a particular clique while in high school. "They called someone who got along with everyone a floater, which is what I kind of was," says Lohan. Throughout the film, Lohan has to undergo a subtle metamorphosis from shy to mean girl, in order to fit in with the popular set. Asked which character extreme is more comfortable for her, the actress is quick to respond. "It's more comfortable being the nice girl, but it's more fun being the mean girl, so I wouldn't categorize them together."

While much of Lohan's work has been defined by family-friendly fare such as Freaky Friday and Parent Trap, the actress has no preference tackling the more sophisticated Mean Girls over her Disney comedies. "I do think this has an edgier aspect, and it feels good to do something that's more age-appropriate for me and it's kind of different from anything I've ever done." And Lohan was able to play a character that finally begins as a clean slate. "I think it's a lot more interesting to watch a character go through a transition in a movie. She kind of goes through this transition where you love her, then you almost want to not like her because she becomes mean and she gets lost. But you feel for her because it's not her fault that she's become like this, but the people around her. Then she realizes who she wants to be so I think it's fun to watch that."

Talking about her real high school experiences, it's clear that Lohan is pleased to be done with those formative years. "I'm done with school as I'm going to be 18." Though college waits, Lindsay acknowledges juggling a successful career and academia may not be entirely an option. "It's kind of hard for me in this position. This is what I aspired to do, is what I want to do in life and is what I want my career to be. At this point I just feel I'm not in a position where I can come back and people can go: Oh, she's an established actress and she went to college."

Once there, however, she has her heart set on entertainment law, "just because I'd kind of like to know what's going on with my business rather than having to give it up to everyone else. I think it would just be for my sake, if I continued acting."

Lohan is fast emerging as one of Hollywood's hot starlets, but nothing lasts forever. In commenting on the transition she will soon be making from teenage star to adult, Lohan is philosophical and realises that it is a transition she has to work towards. "I think it gets to the point where everyone has to. Right now, I have la younger fan base, so I don't want to grow out of them and just kind of leave them and not be able to come back to anyone, because once I grow up in movies, I can't really want to go back. So I want to kind of grow with them and find the right material that's not too over the top but kind of is different than this. I'd also like to do Indies and stuff that's less commercial and more serious." That doesn't quite include her next film, yet another remake [her third] of Dis! ney's The Love Bug, "but it's a great script and fun. I don't think there's anything wrong with doing remakes."

As for her private life, Lindsay lives in New York's Long Island, and blissfully single, she says, "Because I haven't found anyone I want to date."