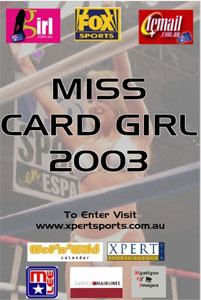 The Brisbane RNA Showgrounds will play host to one of the biggest Fox Sports kickboxing event for the year when our Australian champions take on the World, but with the running of the inaugural Miss Card Girl 2003 at the event, the girls may steel the show.

The Miss Card Girl 2003 will be run in conjunction with the Fox Sports event on November 7th and a semi final may also be needed to be conducted on November 5 at the Adrenalin Sports Bar in Brisbane's CBD. The contest will provide a great entertainment package for all viewers at the event and watching at home on the telecast, showcasing some of the hottest girls in Queensland and from interstate.

Luke Jenkinson, the Executive Director of Xpert Sports Agency [XSA] states "this organized contest will not only keep the spectators entertained between rounds and fights, but has the potential to blossom into a major sports model contest in years to come".

With prizes including a calendar photo shoot in Wet n Wild 2004, a portfolio photo shoot, 2 nights for 2 on the Sunshine Coast and much more, it is predicted the contest will attract great talent around Queensland and interstate.

Excited about the contest, Mark Catagnini adds "Fox Sports is delighted to have this contest organized for a fight night of this stature as it provides fantastic entertainment for our viewers at home and on the night".

XSA staged the 2003 Swimwear Spectacular on the weekend of Nov 1 & 2 displaying some of the best swimwear labels in the country in 6 parades. The event was a huge success with all reports from labels, general public, models and event coordinators being very positive. Attached are some pics taken from the parades.

All models used in the parade are represented by XSA and are available for future parades, showings, photo shoots, promotions etc. XSA offers it management services to organising such parades and specialises in sports and event promotion.

XSA is now shooting a sports model calendar to promote the much anticipated 'X Girls' concept. Advertising for the calendar is open to all companies interested in reaching state and national retailers, marketers, promoters, sports event organisers and much more. 100 calendars will be produced and distributed by xmas this year. 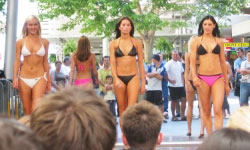 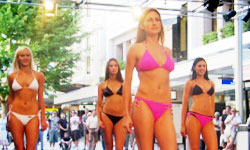