Headliners announced for Chefs in the North Dinner The Chefs in North Festival Dinner is a spectacular culinary event where fine food, wine and music merge seamlessly under a stunning marquee on the grassy lawns of Jupiters Townsville.

This black-tie prelude to the opening of the world class Australian Festival of Chamber Music will feature some of Australias best known chefs from Melbourne, Sydney, Brisbane, Townsville and this year, New Zealand, in a six-course Degustation Menu, matched with superb wines and accompanied by sublime musical interludes.

The evening will be hosted by Lyndey Milan, Food Director of The Australian Womens Weekly and co-host of the Channel 9 National program 'Fresh'.

The 2007 Australian Festival of Chamber Music features an outstanding music program of 80 compositions by 43 composers with 33 world class artists in 25 performances and also includes the famed Reef Talk Series, The Xstrata MacAir Outback Tour, The Winterschool and more.

To be held from July 6 to 15 this year, the Australian Festival of Chamber Music is the largest chamber music festival in the Southern Hemisphere. In 2006 over 10,000 patrons experienced the Festival. 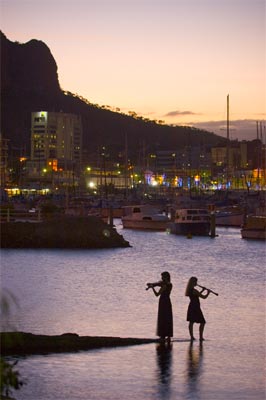