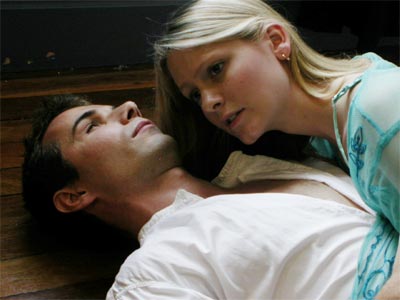 The shifting moods of adolescence have never been better dramatised...

Its summer in Verona. Stifling heat and tension in the air. Two powerful families clash in ugly street brawls, stirring up ancient animosities. Two young people meet and fall in love. The tragic story of these star-crossed lovers has been a perennial favourite for more than 400 years. This new production from the Shakespeare Globe Centre will bring all the passion and lyricism of the world's greatest love story to the stage of the Bondi Pavilion Theatre for a limited season from 30 May to 23 June 2007.

Romeo & Juliet is a play that is by turns delicate and intense, uproariously funny, obscene, and always heartbreaking. Shakespeare expended some of his finest lyrical verse on this story of two star-crossed lovers.

Director Matthew OSullivan brings an intimate knowledge of the play to this 2007 production having first appeared in it in 1967 in a Royal Shakespeare Company production starring Ian Holm at Stratford-on-Avon. Some years later he directed it in New Zealand (and played Mercutio) in a production that one critic called 'sheer exhilaration'.

In the 1970s Matthew played the Chorus and the Prince in a Nimrod Theatre production by John Bell starring Mel Gibson and Angela Punch McGregor.

This new production will be set in the late Renaissance period (what Matthew prefers to call 'modified Renaissance') but will be entirely modern in approach. "Feuding families, old hatreds, mindless violence, the stupidity of the old, the innocence of the young - what could be more contemporary" says Matthew OSullivan "I cant wait to start work on it".

The cast will feature several members of the Globes core ensemble who have previously appeared in King Lear, The Tempest and Hamlet, including Alan Faulkner, Les Asmussen , Anthony Hunt and the Globes director and founder, Diana Denley, returning to the stage after many years of producing and directing, to play the nurse.

The Shakespeare Globe Centre Australia works in affiliation with Centres around the world, to encourage the enjoyment and study of the Shakespearean arts.