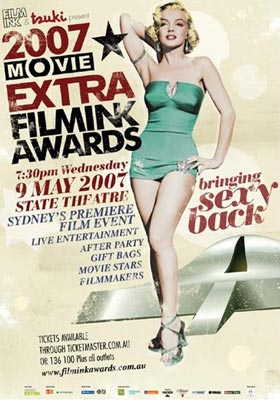 WEDNESDAY 9 MAY 2007, filmmakers and movie lovers will gather at the 2007 MOVIE EXTRA FILMINK Awards to celebrate the results of FILMINK Magazine's Annual Movie Poll. Continuing last year's success, the Awards will be hosted at Sydney's historic State Theatre, one of the country's most enviable and iconic venues.

The MOVIE EXTRA FILMINK Awards, whose growing popularity was reflected by in-excess of 15,000 voters at the polls last year and a sell-out of the State Theatre, is now in its fourth year and is the only night of nights to celebrate every film that has been released at Australian cinemas during the entire calendar year. The Awards are voted for by cinema-goers and film buffs around the country and feature traditional categories like Best Australian Newcomer, Best Film and Best Documentary, as well as weighing in on matters like Best Sort, Best Movie Mind Fuck (think Hostel) and Best Politically Charged Movie (will John Howard finally admit that he's seen Al Gore's An Inconvenient Truth)... With a perfect balance of movie-love and irreverence, the MOVIE EXTRA FILMINK Awards are for serious moviegoers who don't care for air kisses... In terms of a comparison, something like the MTV Movie Awards could be applied, except that we're uniquely Australian.

The Awards are attended by celebrities and key industry representatives including film and DVD distributors, record labels, exhibitors, film and television personalities, rising Australian talent, producers, directors, actors, corporate partners, media and the general public. The format for the evening includes red carpet, an awards presentation including celebrity presenters, MC, live music and entertainment, drinks and a rocking after party.

Last year's Awards was a fabulous evening of carousing, irreverent film appreciation and non-stop entertainment, with special guests including Russell Crowe, Emily Barclay, Steve Bisley, Wolf Creek's John Jarratt, Kestie Morassi, Cassandra Magrath and director Greg McLean, Sybilla Budd, Victoria Thaine, Isabel Lucas, Steve Bastoni, David Field, Abe Forsythe, Steve Le Marquand and Richard Wilson to name a few. The evening was capped off with an incredible performance from Russell Crowe and The Ordinary Fear of God singing a world first a cappella dedicated to the late, great Richard Harris, and hip hop band, Bliss 'n Eso customising one of their own tracks just for the awards and getting the crowd amped for the after party.