Red Bull BC One World Championships 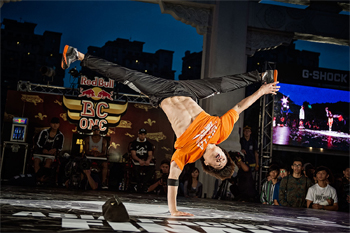 Red Bull BC One World Championships

2014 brought an incredible year of more than 90 Cyphers held around the world. Winners battled at six qualifying Finals in the USA, Brazil, Algeria, Finland, Croatia and Taiwan. The six Finals winners will join ten Wild Cards to descend upon the global stage, going full force in knockout, one-on-one battles to determine who will be the world's best B-Boy.

It all goes down November 29 at the historic Grand Halle de la Villette in Paris, France, one of the city's top cultural centers, which today hosts many landmark Hip Hop and dance events. The 'City of Light" first hosted the event in 2008, when Red Bull BC One All Star Wing took home the World Champion title.

After last year's Red Bull BC One All Star Hong 10 took home his second belt in Seoul, Korea, the level of competition is getting tougher and tougher as B-Boys continue to push the boundaries of breaking. Each contender has been training year round for their moment on the World Final stage, one of the most coveted titles in B-Boying today.

The Dance Event of the Year Goes Down November 29 in Paris, France
Watch it live on redbullbcone.com